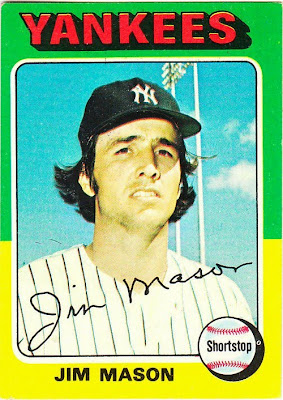 Card fact: Another color combo that we haven't seen for 50 cards. Good to have you back, green-yellow!

What I thought about this card then: Never saw it. The first Jim Mason card I had was the 1977 card of him with the inaugural Blue Jays team.

What I think about this card now: Mason kind of has a Tim Lincecum thing going with that hair flip. It looks rather girly. Yes, girly enough to be categorized as a "dude who looks like a lady."

Other stuff: Mason's only a season of playing in more than 100 games came in 1974 when he started 152 games as the Yankees' starting shortstop.

It was a dark time for the Yankees at the position. Mason replaced the weak-hitting George Michael. Then, Mason followed his 1974 season by hitting .152 in 1975. Topps didn't even give him a card the next year. Mason was replaced at shortstop by Fred "Chicken" Stanley, another light hitter.

No wonder Yankees fans flipped over the rather mediocre Bucky Dent! Compared to the guys before him, he was practically Cal Ripken. 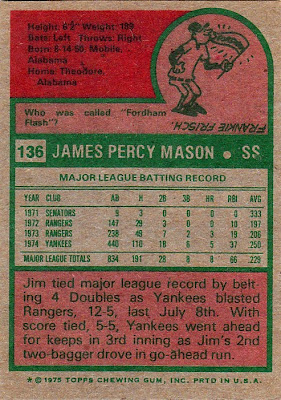 Back facts: Mason continues to hold the record of most doubles in a game with four. He holds it with many other people. In fact, 17 players have hit four doubles in a game since Mason did it. The most recent was Alex Rios on Aug. 17, 2008.

Other blog stuff: What do you think? Should we call this color combo the "lemon-lime" combo?
Posted by night owl at 2:15 AM

I was happy for him to have that "record" to hold onto until I read that is was agains the Rangers. Please tell me he does NOT have a Rangers card in 73 or 74.

Lemon lime or peas and corn.

I was actually watching the game when Mason got his four doubles. His other memorable baseball accomplishment was hitting a HR in his only World Series at bat, in 1976. For a weak hitter, what he might best be remembered for are both hitting feats. After Tony Kubek was forced to retire very young by injuries, the Yankees couldn’t find a satisfactory SS replacement for him for almost 15 years, until they got Bucky Dent.