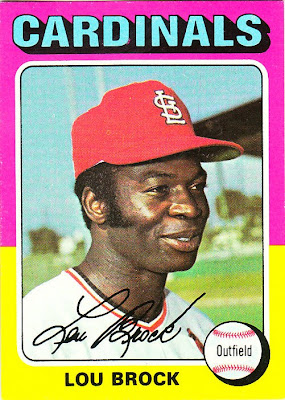 Card fact: This is the third and final card of Lou Brock in the set.

What I think about this card now: It makes me think of how I acquired it. When I was attempting to complete the 1975 set back in 2003/04, the Brock card was one of the first "big cards" from the set that I obtained. I gained it in a trade with a co-worker, and am still amazed by how little he wanted for it, and by how great the card looks. It's in terrific shape.

Other stuff: Well, you all know about Lou Brock, don't you? Saying that he was the bridge between Maury Wills and Rickey Henderson sounds like an insult. So, I'll just say that Lou Brock was THE king of the stolen base when I was a child. He studied the art of stealing more than anyone, and back when I was a kid, they wrote odes to his base-stealing ability. I addressed most of my childhood knowledge of the man in one of the first posts on this blog.

Brock was at the height of his popularity in 1975, after just setting the single-season record of 118 stolen bases in 1974. Of course, he finished with more than 3,000 hits and was a shoo-in to the Hall of Fame. But I think Brock doesn't get a lot of attention these days, compared with some of the past greats. 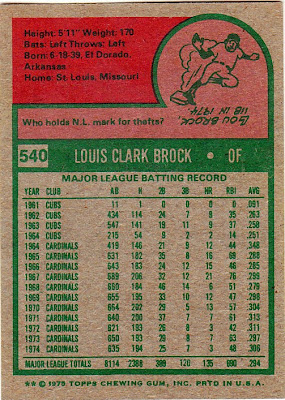 Back facts: Topps lobs a softball on the trivia question.

Other blog stuff: The pink-yellow color combination reties the orange-brown color combo for the overall lead with 46 cards each. It's a back-and-forth race now.
Posted by night owl at 12:33 AM

A softball on the trivia question, but pretty cool for Brock that it's about him on his own card. Have you been tracking how often that has happened? I think I asked once before but can't remember what you said.

I agree ... Brock is kind of a forgotten hero. So is Frank Robinson.

I haven't been keeping track, but I know it's happened maybe less than a dozen times.

Crap, now I have to go back and see how many card back cartoons feature the player on the card! I like his name...Louis Clark...get it? Louis...and...Clark? I know, it's dumb. I'm sleepy.

I think very few baseball fans under the age of 25 know anything about Brock. It's a shame.

Since Brock's career stats were going to take up the rest of teh card, I see that trivia question as a nice (dare I say classy?) touch.

This was the last card I needed to complete my 1975 set. It was late in the season and one September Saturday morning I walked down the street to my friend Jimmy's house. I went to knock on the door and I saw two Brock cards in the screen door. After some negotiations that involved me giving up a bunch of star '75 Topps football cards, I got my hands on one of the Brock cards. In terms of number of cards and quality of players, he probably got the 'better' of the trade, but I think I did ok.

Football cards for baseball cards??? You cleaned up!