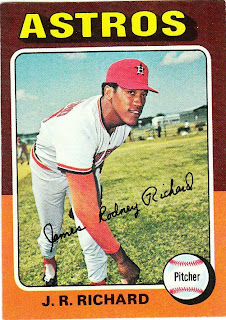 Card fact: One final year of dignity for J.R. Richard. This is the last year that these particular Astros uniforms would appear on baseball cards. After that, it was rainbows on the tummy and uniform numbers on the upper thigh. What I thought about this card then: Even as a youngster I knew this was one tall dude. I had this card when I was 9. I still have that version, but I forgot to scan it. What I think about this card now: It almost looks like Richard is working out on a farm -- a tilted farm. Is that a ranch on the right? Other stuff: I've written about J.R. Richard on the other blog. My lasting memory of him is sorting the newspapers before I went out on my paper route and reading about how he had suffered a career-ending stroke. Richard was an All-Star only once, during his final season. He won 18 games three times, 20 games once, struck out more than 300 batters in a season twice, and more than 200 batters in a season two other times, won the ERA title once, and did all of that before he was named to an All-Star team. That's ridiculous. 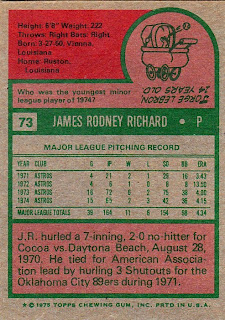 Back facts: Regarding the cartoon: Jorge Lebron was signed by the Phillies out of Puerto Rico. He appeared in three games for the Auburn Phillies as a 14-year-old, before returning to Puerto Rico to finish school. He was the youngest player to play in a minor league game. Auburn, N.Y., isn't that far from me, but I had never heard of this story until now. Other blog stuff: Scanning has resumed with a vengeance. Just 66 cards to go!

I remember my dad talking about how good Richards was and what a shame it was about the stroke. I didn't realize he was putting up those kinds of numbers though. You'll be finished scanning in no time.