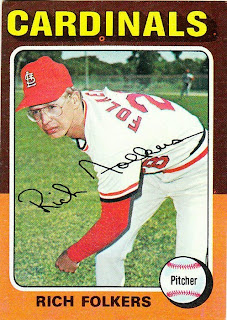 Card fact: Voted the 1975 card "most likely to be made fun of by card bloggers" in a nationwide poll of collectors in 2007. (Shhh!! I want somebody to think that's a real fact!)

What I thought about this card then: I didn't see it. But I guarantee I would have been suitably horrified if I did.

What I think about this card now: Geez, Topps, put some distance between the camera and the subject, will ya? ... Also, it took me an abnormally long time to get a card of Folkers in respectable shape.

Other stuff: OK, I've had my fun with Mr. Folkers (insert "Meet the Fockers" joke here). The truth is he was a highly coveted pitcher in the late 1960s. The Mets, who had a bit of success with selecting pitchers during that period (see Seaver, Koosman, Matlack), made him their No. 1 pick in 1967.

Folkers had some promising years in the minors, but couldn't continue that success in the majors. He skipped around from the Mets to the Cardinals to the Padres to the Brewers to the Tigers, and was done by 1978. 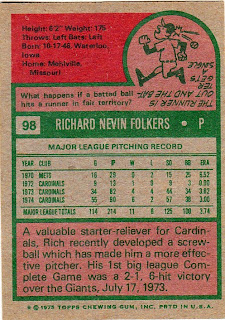 Back facts: Um, if you get hit in the back of the head with a batted ball, like this cartoon guy, they're calling the paramedics stat.

Other blog stuff: I am tempted to call this color combination the "Cleveland Browns" design.
Posted by night owl at 12:33 AM

I think you should go with the Cleveland Browns reference. That way you might get some Browns fans to come to your blog by mistake and they'll convert to baseball card collectors.

The Mets also drafted a guy named Ryan that some people have heard of ;)