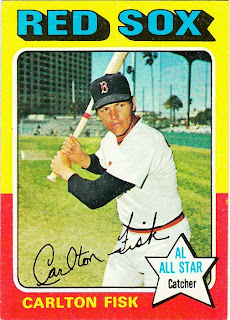 Card fact: I do believe that building in the background of this photo is the tallest building you will see in this set or maybe any card set. I'm not sure what it is. Possibly the team hotel?

What I thought about this card then: An instantly awesome card. The yellow-and-red all-star borders made this card extremely desirable. And we didn't see all of the all-star cards in 1975, so the ones we did see -- Fisk, Bench, Rose, Morgan, Cey, Garvey, Campaneris -- were very valuable to us.

What I think about this card now: The serious look that Fisk always seemed to show on his cards made him appear extra cool to us as kids. Now, he just seems cranky.

Other stuff: I am honestly conflicted about my perception of Fisk. On one hand, he was a talented Red Sox player who worked intensely hard his whole career and was one of the best catchers ever. He also seemed to loathe the Yankees. That's a plus. On the other hand, he just seemed so uptight, getting in little feuds all the time. I'm not sure what to make of him.

However, his 12th-inning home run in the sixth game of the 1975 World Series is my first baseball memory, so I could never say I dislike the guy. 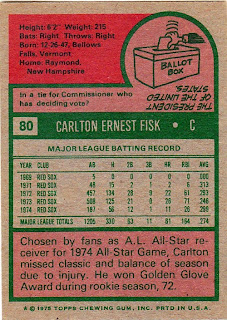 Back facts: Did you know the president decides a tie in the commissioner vote? I didn't.

Other blog stuff: Like the Topps all-rookie team, I've decided to list the All-Star team for the AL and the NL, according to the Topps' all-star cards. I'm catching up here, so this is what I have so far:

I always thought that Fisk didn't smile until he came to Chicago. It certainly seemed that way judging by the cards.

I've been trying to figure out what that building was for years. I still haven't found an answer.

I have that card...yay me! I once tried to figure out what that building was....and didn't.

Obviously, it's a Spring Training site. Fisk looks like he's got a home jersey on. The Red Sox trained in Winter Haven at the time. According to Google Earth, there are a lot of what look like townhomes beyond the right field wall. However, they look to be less than 30 years old to me and the Fisk photo could be a building still under construction.

Thereore, I'm going to guess that the building in the background is a condo development half-way done that the owner ran out of funding for in the 1974 recession, the "under construction" condo was then imploded and someone else built townhomes on the site.

I know it's not the tallest building in ANY set. I forget which company/set it was from but sometime in the late 90's a company put the World Trade Center towers in the background of some Yankee cards. They were all over Ebay after 9-11

The condos beyond the right field fence were built in the '90s. Before that time there was an orange grove back there. I've been to that old "Chain O' Lakes Park" a few times, Red Sox era and Indians era. Great old park but no massive building in the immediate vicinity.