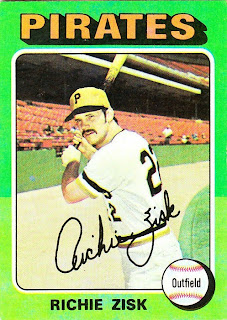 Card fact: Zisk is NOT the only player in the set to have a last name that starts with a "Z." ... Man, it took me about 5 minutes of staring at the screen to come up with that.

What I thought about this card then: One of my favorite cards in the set. I thought Zisk was very cool, even though I didn't know a single thing about him. I pulled this in a pack of cards that my father bought me after I came home from the hospital after suffering from some sort of sickness.

What I think about this card now: The mid-1970s Pirates were such a cool team. Many of the Pirates cards from this set take me back to that time. 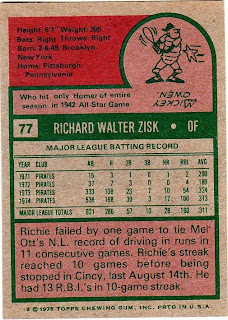 Back facts: Zisk's .311 lifetime batting average was very impressive to me when I was young. He ended up batting .287 for his career. His best year -- 1977 with the White Sox -- was ahead of him. But he only lasted through the 1983 season. He's been a coach in Daytona Beach, Fla., with the Cubs for quite awhile. 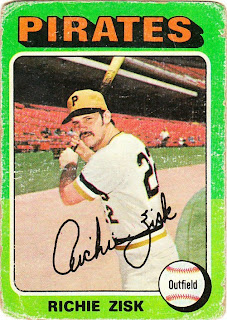 Oldie but goodie: That is the original card of Zisk that I liked so much.
Other blog stuff: Work has eaten all my scanning time, so I remain stuck on 66 cards left to scan. Maybe I'll get to it this weekend.
Posted by night owl at 2:53 AM

Some people are fortunate to have cards their dads or granddads left them. You have a card you KNOW came from a pack your dad bought for you and even remember why he he gave it to you. That's cool. I've gotten a few 1978 Zisk Rangers lately (one from you I think) so I'm interested in learning more about him. I had to look at that card for a minute to realize the green behind him is the wall, not more grass. I thought that as a weird layout, but it turned out to be the wall.

When you get to Zamora or Zahn you may wish you had the Card Fact from this card still available....

While the Pirates tried Manny Sanguillen in RF for a few weeks at the beginning of the 1973 season, it was really Zisk that ended up taking over in RF for Clemente in 1973 (only because Dave Parker needed another year before he could come up and take it).