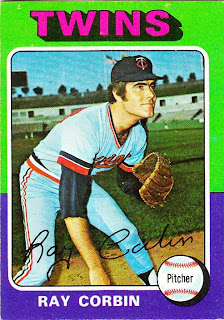 What I thought about this card then: Wasn't in my collection.

What I think about this card now: They sure had some strange poses for ballplayers in the 1970s. Why would Corbin be looking where he is looking after delivering a pitch? Did he just uncork one into the 12th row?

Other stuff: Corbin had a brief career, which is a bit mysterious because the five years he pitched for the Twins weren't all that bad. Sure, his ERA was monstrous in '74 and '75, by 1970s standards, but he seemed to win every once in awhile.

Corbin disappeared from the majors in mid-July at age 27. He had one card in 1976 and that was it. 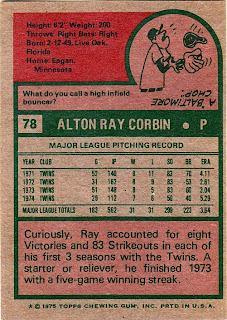 Back facts: A major thumbs-up to the blurb writer who discovered that Corbin had eight wins and 83 strikeouts in each of his first three seasons. That guy has a blog future in front of him.

Other blog stuff: You may have noticed there have been precious few "no-names" like Corbin among the first 78 cards. Topps seems to have front-loaded this set with the more notable players. There are some real nobodies toward the end of the set.
Posted by night owl at 3:05 AM

I think holding that pose too long may have shortened his career. I had an old black and white picture of him at some point in the past that was taken at a game in Minnesota by one of my parents. I don't know why they would take his picture, but they did.