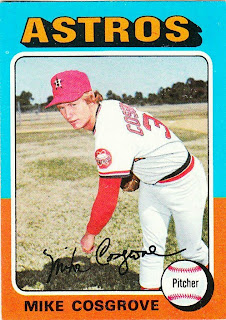 What I thought about this card then: I had the mini card, but I didn't give it much thought other than that it was so cute (the card, not the guy). But this card horrified me. What a change!

What I think about this card now: I'm not sure where Cosgrove is in relation to the distant basepath and backstop in the background. He may be way out in the outfield somewhere. A perfectly logical place to throw a pitch. Oh, and the grass needs watering.

Other stuff: Cosgrove had a brief four-year career for the Astros. He has just three Topps cards. He was drafted away from the Astros by the Indians in the Rule 5 draft and then was acquired by the Blue Jays through the ominous-sounding "unknown transaction." But he never did play for anyone other than the Astros.

Also, Cardboard Gods did a nice examination of the contrast between Cosgrove's '75 and '76 cards. 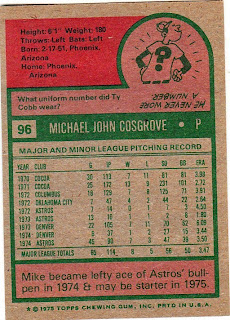 Back facts: Topps kind of faked out collectors with the cartoon trivia question. A little cheap, if you ask me. Wearing numbers on baseball uniforms was sporadic until the 1920s and didn't catch on with every single team until the 1930s.

Other blog stuff: Nothing bloggy today. The No. 1 song in the country on this date in 1975 was "Please Mr. Postman" by the Carpenters. Yeah, really.
Posted by night owl at 2:45 AM

Ok, I clicked on the first link and now, I may never click on another link again. That 76 was enough to make me want to skip the whole set. Almost.

I didn't remember this trivia question from the 75 set. But I always found the history of the uniform number intersting. I wrote a column about it several years ago.