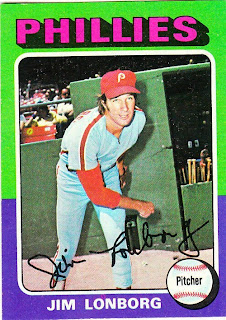 Card fact: I have no facts for you. But I do have a guess: I'm going to guess that this card photo features more bats than any other card in the set.

What I thought about this card then: Didn't have it. My first memory of Lonborg is his 1976 Topps card.

What I think about this card now: The man peering out from behind the dugout is a little unsettling.

Other stuff: Lonborg has several interesting cards. I am partial to the 1969 Topps card that advertises Gilbey's Gin in the background. But there is also that hellacious back-to-back airbrushed combo from 1972 and 1973 Topps. Two of the worst airbrushed caps ever.

Of course, Lonborg is most known for his 1967 season with the Red Sox when he went 22-9, and the ensuing skiing injury that damaged his knee and put a major dent in his career. Lonborg retired to Massachusetts after the 1979 season and has been a dentist for years. 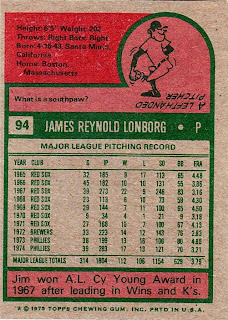 Back facts: They couldn't have saved the southpaw question for a left-hander?

Other blog stuff: There were some interesting name ideas for the brown-tan combo. I'm going to mull those over some more.
Posted by night owl at 3:32 AM

That guy in the background is creepy. How many Major Leaguers do you think become dentists after they retire? I'll bet this is a pretty exclusive group.

Jim Gaudet (a little used catcher for the Tigers) became a dentist.

Lonborg Trivia-He is the picture in the bar on Cheers which is supposed to be Sam Malone.

I apologize to all the Gaudet fans. He actually played for the Royals.

I'm working on my 1970 Topps set right now and I've been surprised how many bat stashes find their way into the pics.