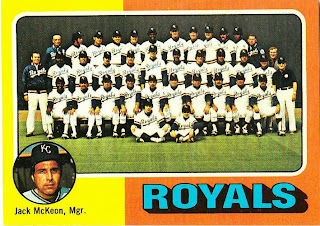 Card fact: The last card featured on this blog in 2009. Woo-hoo!

What I thought about this card then: The story is going to be the same for every checklist card. When I was a kid, team cards were boring. End of story.

What I think about this card now: It's strange to see Jack McKeon so young. I am more familiar with the "grandfather in glasses" image with the Marlins and the mustachioed McKeon with the Padres.

Other stuff: Is this the dullest backdrop in a team card photo? We'll have to see. 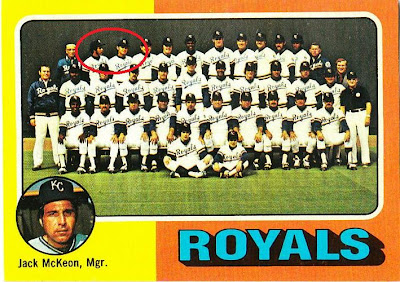 Also, I won't pretend to know who the two players are that I have circled. It looks to me that it could be Amos Otis and Steve Busby. And if it is, Otis appears to have taken offense to something just said by a smirking Busby. 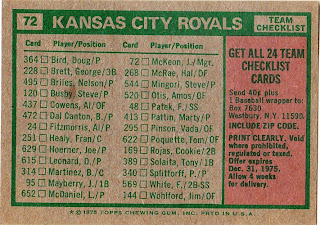 Back facts: Three pretty good rookie cards on this list, #569 Frank White, #615 Dennis Leonard, and, of course, #228 George Brett.
Other blog stuff: Time to figure out if Topps left any prominent Royals out of the 1975 set.
The Royals used 34 players in 1974 and Topps nabbed all of the major figures. Topps had cards for 24 of the players, including reliever Gene Garber, who was purchased by the Phillies in mid-season and is featured with the Phillies in the '75 set.
The players who participated the most for the Royals but did not get cards were Orlando Cepeda, who had 107 at-bats as a DH for the Royals, and Kurt Bevacqua, who batted 90 times in a utility role.
That was Cepeda's final season. How great would it have been to see a card of Cepeda in a Royals uniform?
So here is where the Royals stack up in terms of percentage of their players being featured on cards in the '75 set:
1. Tigers 78.37% of players featured
2. Royals 70.59%
3. Phillies 62.5%
Posted by night owl at 1:10 AM

I've actually had this card for a long time. I figured that this card was about as close to a Brett rookie card that I would ever get.

I like the team photo checklists. At least I do now. That would be a good one for someone to put a caption to. Congrats to the Royals for being in the middle of the pack on percentage.

I didn't even know Cepeda played for the Royals. A lot of my early baseball awareness was only what Topps fed me.

This is an amazing and thoroughly entertaining site. Nice work. Frank White actually had a rookie card, though, in the '74 set. Thanks.