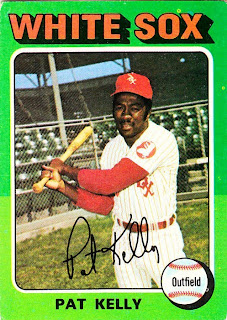 Card fact: One of three people named Pat Kelly to make the major leagues. I know certain Yankees fans don't believe that there was another person named Pat Kelly besides that semi-sorry excuse for an infielder that played for the Yankees in the mid-1990s. But there was. And this one was better.

What I thought about this card then: I felt a little guilty about having this card. That's because I shoplifted a pack of cards from a drug store in 1975 and this card was in the pack.

What I think about this card now: You are never going to hit a ball anywhere with a follow-through like that.

Other stuff: Kelly probably had his best years with the White Sox, but he had his most success with the Orioles, when he was a role player and helped Baltimore to the World Series in 1979. Kelly died of a heart attack in 2005. 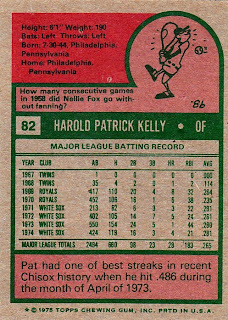 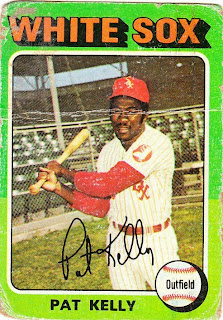 Oldie but goodie: There is the original card. The original shop-lifted card. That crease has been in the card for so long that whenever I think of the Pat Kelly card (which is almost every hour, by the way), the card has a crease right through the face.
Other blog stuff: Let's go with another anniversary. On this date in 1975, the Steelers beat the Vikings, 16-6, to win Super Bowl IX. How did we get through the rest of January back then?
Posted by night owl at 3:00 AM

Ouch...that story touches a nerve with me. It's not something that is easy to talk about. Not at all. On a card-related note, I never saw the White Sox in those red unis. It's a little unsettling.

Speaking of football, Pat Kelly was the brother of Leroy Kelly, a hall of fame running back for the Cleveland Browns.