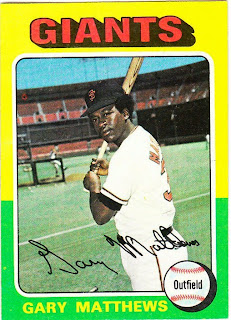 Card fact: This is the last card in the third rotation of teams in the set. Like the first rotation, it began with the Red Sox and ended with the Giants. The fourth rotation will march to its own drummer.

What I thought about this card then: It pains me to say this, but there are too many Giants cards in the 1975 set that I thought were cool. I was such a dumb 9-year-old. But both Matthews and Garry Maddox seemed cool to me, and I liked their '75 cards a lot. I pulled the Matthews card in some packs that we bought at a drug store while vacationing in southwestern New York in the summer of 1975.

What I think about this card now: Well, other than it is a stinkin' Giant, the field is tilted again.

Other stuff: Matthews enjoyed a fine career for the Giants, Braves and Phillies (and one decent year with the Cubs). He was the source of some pain for my favorite team with a home run he hit in the 1983 NLCS.

He's a definite "bad ass" club candidate (his 1981 Topps Traded card is a wee bit scary), and he is the FIFTH guy already in this set to have had a son play major league baseball. 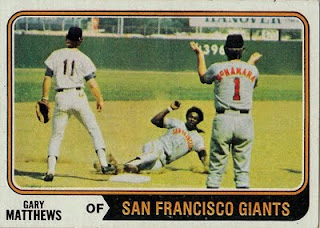 That's one of the greatest cards from the 1970s right there. 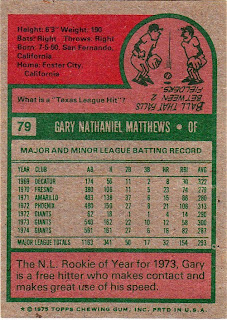 Back facts: I didn't know the origination of the phrase "Texas League hit" or "Texas Leaguer," so I looked it up. Apparently, it came from a player, named Art Sunday, who arrived in Toledo from the Texas League. He hit so many balls that fell just between fielders that the hits began to be called "Texas Leaguers."
Also, I'm not sure what a "free hitter" is. Perhaps they meant "free-swinging hitter"? Matthews did strike out a fair amount.
Other blog stuff: SCANNING IS DONE! All 660 cards in the set are scanned. I went on a marathon scanning session to finish it off. What a relief.
Posted by night owl at 2:41 AM

Love that '74! I can't tell if the third base coach is applauding or telling no need to slide..

That background is so tilted I almost fell out of my chair. Seriously. It could also be the lack of sleep. That 1974 card is great. I've never seen it. Congrats on getting your scanning done.