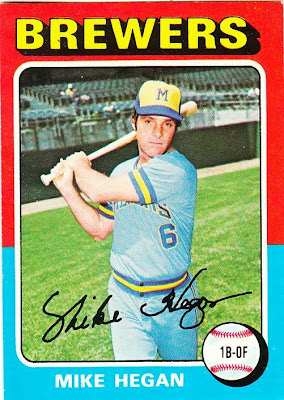 Card fact: The photo on this card is also used in the Father & Son subset in the 1976 Topps set, pairing up Hegan with his father, Jim, who caught for the Indians.

What I thought about this card then: I had the mini card. But I can't recall thinking much about it.

What I think about this card now: Hegan has a few cool cards, although this isn't one of them. I like his 1972 Topps card a lot, when he's in the batting cage. The first card of his I saw was the '76 card, where he's holding out his first baseman's mitt with the ball in it.

Other stuff: Hegan was a member of the Seattle Pilots and hit the first home run in Pilot franchise history. His claim to fame in the "Ball Four" book is his response to a public relations questionnaire that asked "what's the most difficult part of being a major leaguer." Hegan said, "explaining to your wife why she needs a pencillin shot for your 'kidney infection.'"

Hegan has been an announcer ever since his playing career ended in 1977. He's been the announcer for the Indians on the radio for quite awhile. 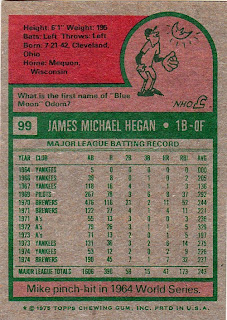 Back facts: You can see by the stats that Hegan was a lifetime backup, yet he lasted 13 years in the majors and was a member of three World Series teams.

Other blog stuff: Card No. 100 is coming up tomorrow. Every 100 cards I will update where I stand with the various categories I'm tracking. You know, just in case you have no life.
Posted by night owl at 1:47 AM

A bad day in the Majors is better than a great day at work. I want to see the update on the categories and I HAVE a life.

Oh, who am I kidding?

Gotta love those one-line blurbs Topps put on the backs of some cards in order to fill the space.

Red-blue was used just 2 cards ago. That seems odd.