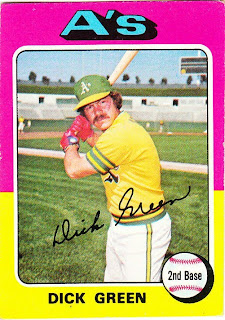 Card fact: This is the final card of Dick Green issued during his career. I've been saying that a lot lately. And it's particularly sad here because Green's mustache was reaching its glorious peak. Cut down in its prime.

What I thought about this card then: I know I liked this card a lot because of the mustache. But I also liked it because you can't get more BRIGHT than a guy wearing green and gold on a card framed in hot pink and sunburst yellow.

What I think about this card now: When I have a lot of time on my hands (ha!), I should look to see if Oakland's stadium is featured more on the '75 set than any other stadium. I wouldn't be surprised.

Other stuff: Green held the A's record for career home runs by a second baseman until Mark Ellis passed him at the end of this last year.

Also, Green went his entire career, which spanned 12 Topps cards, and never had his name printed in green on his card. How is that possible? His last name is Green, he plays for a club with green in its team colors. This should be a no-brainer. 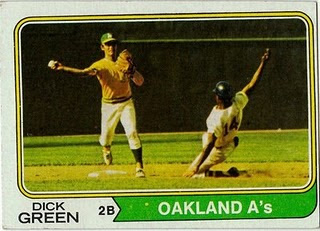 That's about as close as he got. I counted four times when his name was printed in yellow. But his name isn't "Dick Yellow." 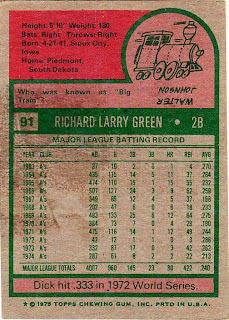 Back facts: It's rare to see a member of the Swingin' A's feature stats all with one team. Most of the guys -- Vida Blue, Sal Bando, Joe Rudi, Gene Tenace, Rollie Fingers -- took advantage of the early free agency years or were traded off. 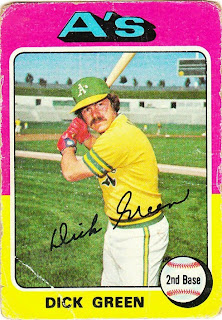 Oldie but goodie: There is the original Dick Green card I had at 9 years old. Thirty-five years doesn't diminish the brightness, does it?
Other blog stuff: In 1975, ABC debuted "Welcome Back, Kotter." It was the first sitcom I ever watched. I don't remember the name of my baby-sitter, but I thank her for getting me hooked on mindless half-hour comedies for the rest of my life.
Posted by night owl at 2:56 AM

That is a BRIGHT border and equally bright header. I wonder about the red batting gloves...those do not go with that uniform, but they're not bad with that border.