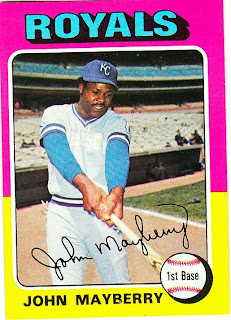 What I thought about this card then: No knowledge of it. However, Mayberry's 1976 Topps card was a personal favorite of my friend Jeff's. Jeff had moved to New York from Kansas and was a huge Royals fan. I got to know the Royals quite well during the brief period that I knew him.

What I think about this card now: Mayberry smiles often on his cards. I like that.

Other stuff: People wonder why Yankees fans irk me so much. Well, there are many reasons, but here is one of them:

A long time ago, but still quite awhile after Mayberry had retired, his name came up in a discussion with some people I knew. Some Yankees fan, no doubt relying on his vast baseball knowledge, said, "Oh, yeah, the first baseman for the Yankees."

I don't remember where I was at the time I heard this, but say we were walking down the street. It took everything in my power not to rip the nearby light standard off its concrete moorings and beat him senseless with it while yelling, "You. IDIOT. Mayberry. Played. One. SEASON. For. The. Yankees. In. The. Last. Year. Of. His. Career. And. He. SUCKED. He's. A. Royal. Dammit. A. ROYAL. Got. It?"

Sorry. I just hate it when Yankees fans get all parochial. 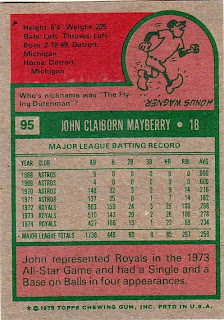 Back facts: Notice Mayberry's stats for the Astros. He did not do well, to put it mildly. I read a book as a youngster about Mayberry's struggles with the Astros and how everyone was giving up on him. Then he was traded to the Royals for pitcher Jim York and became a masher.

Other blog stuff: Since so many players in the first 100 cards of the set have had kids who played major league ball, I decided to keep track of it in the labels. Mayberry's son is playing for the Phillies, so I've added Mayberry to the "MLB son" link.
Posted by night owl at 1:43 AM

That pink/yellow combo is mind-blowing on the header. He really did turn on the power after he left Houston. He'll always be a Royal in my book.

Way to stand-up for the Royals!!

I wonder what that Yankees fan would say if you referred to Babe Ruth as "an outfielder for the Braves."