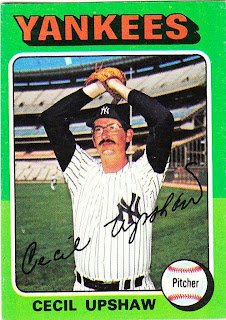 Card fact: OK, all together now: This is the final card of Cecil Upshaw issued during his career. Wow, Topps was killing careers left and right with the 1975 set.

What I thought about this card then: I thought Upshaw was wearing a bandage on his chin. The photo annoyed me. Now that I look at it, I think it's just the sun shining on Upshaw's chin.

What I think about this card now: They certainly made Yankees nerdy in the '70s, didn't they? No wonder they didn't win for the first part of the decade.

Other stuff: I wrote about this on my other blog, but accounts of Upshaw's career point to a moment in 1970 when he was with the Braves. While walking down the street with teammates, he was bet that he couldn't leap and touch an overhead awning. Upshaw did touch the awning, but a ring on his pitching hand caught and he tore ligaments in his hand -- derailing his career. 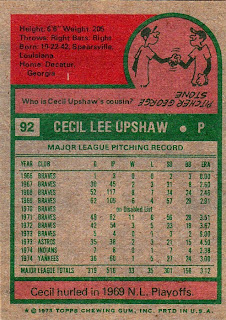 Other blog stuff: I haven't shown the mini card next to the regular-sized card for awhile. So, Upshaw gets to do the honors: 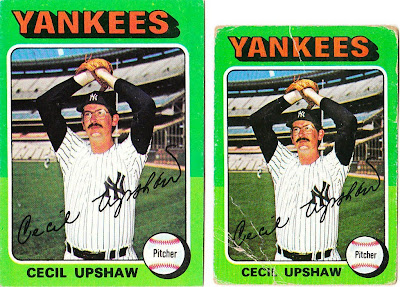 Doesn't that make you happy? It does me.
Posted by night owl at 2:05 AM

Cecil looks like a younger version of the character Milton from "Office Space". Man, that was random even for me. RIP Cecil Upshaw.

I love the mini set. Talk about a classic parallel set.

I was writing about Cecil Upshaw in my 1973 Topps set blog and I came upon your post while I was looking for info on Cecil Upshaw.

I also came across a Baseball Digest article about the incident with his finger injury that you might find interesting.