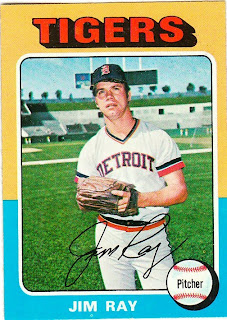 Card fact: This is the final card of Jim Ray issued during his career. That makes two cards in a row for that sad fact.

What I thought about this card then: Did not see it. However, Jim Ray is the subject of the first 1971 Topps card I ever saw. I like the 1971 set a lot, so that is quite the big honor for Mr. Ray, whether he knows it or not.

What I think about this card now: That's a nice view of Oakland's stadium.

Other stuff: So far, there have been just two cards in the set to feature the tan-light blue color combo. And both of them have been Tigers cards. 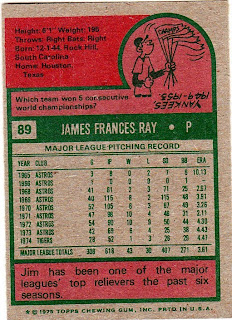 Back facts: It is a little bit freaky that I am featuring the card of someone named James Frances Ray the day after Martin Luther King Jr. Day. I'm glad his middle name isn't Earl, or I have a feeling someone might confiscate my blog rights.
Also, Ray did not play beyond 1974, so you're looking at his full stats there. This card, according to gcrl, would be a Final Tribute card.
I'm ignoring the cartoon. I suggest you do, too.
Other blog stuff: This could be the color combo that goes without a name the longest. I have no idea what to call it. Tan and light blue? Anybody?
Posted by night owl at 2:06 AM

That name jumps right out at you this close to MLK day. He had a nice strikeout/inning ratio '68 and '69 and fell off a bit after that. I had to write something to show you that I looked at the back of the card and was sickened by the cartoon.

How about "Sunset at the beach" for the color combo name? It kinda looks like the golden tan color that the sun sometimes gets when you are looking at it setting (or rising) just beyond a body of water. Or not.

I wonder if players ever got upset by what was on the back of their cards. I'm sure that as well-adjusted, non-obsessive grown-ups they probably didn't care. But I would've been pretty peeved if that was the cartoon on the back of MY card.