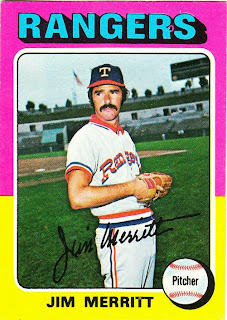 Card fact: This is Jim Merritt's last card of his playing career. It's also the only card of him in which he's wearing a mustache. Just thought you should know.

What I thought about this card then: I had the mini card. This was another one of those cool Rangers cards from my childhood. I think I just liked them because they all seemed like gunslingers, and they were nicknamed the "Rangers." It fit.

What I think about this card then: Merritt looks like he's tilting along with background. Probably trying to keep his balance.

He also had two quality seasons in 1969 and 1970, winning 17 and 20 games respectively. Then he dropped off drastically, going 1-11 in 1971 and barely pitching in 1972. An arm problem that developed during his 20-win season apparently was to blame. Merritt was released by the Rangers the same year his final card appeared. 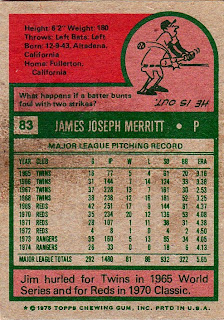 Back facts: I actually learned the "bunting-with-two-strikes" rule from the back of this baseball card. ... Nice gum stain.

Other blog stuff: I still need a name for this pink-yellow color combo. I'm going with the "Easter colors" combo unless I (or someone else) can think of something cool.
Posted by night owl at 12:43 AM

How could he have a career ERA higher than any single year?

Nice catch, Eggrocket. I think I actually noticed that when I was a kid, but then forgot about it.

There's a Ranger I never heard of before. And the border color make me think of Peeps, those hideous marshmallow creatures the stores overstock at Easter.