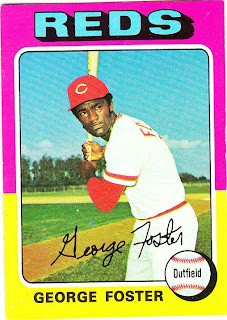 Card fact: One of three players with the last name of Foster in this set. None are related.

What I thought about this card then: I freakin' loved it. One of my favorite cards from the set. Keep in mind that this is a couple of years before Foster hit 52 home runs in a season. Not a single fan knew that kind of home run explosion was ahead.

But still, I loved this card. There are two reasons why I liked it that are hard to reconcile, except in the mind of a 9-year-old child. The first is that I thought Foster was standing in the desert. Now, it's obvious that he isn't. But that's what I thought. The second is I thought he looked like The Grinch from The Grinch Who Stole Christmas.

What I think about this card now: Foster's a member of the "I'm Badass and You're Not" Club, so it's obvious that I still enjoy this card.

Other stuff: It's very strange that I should like Foster, because until his final season with the White Sox, he never played for a team I liked. I guess that's a testament to his bad-assity. 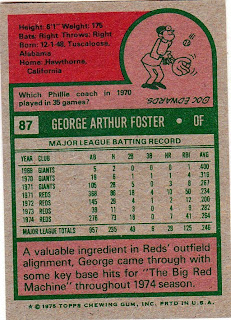 Back facts: As you can see by his stats, Foster had yet to blossom into the feared home run hitter that he became between 1976 and 1983. He is merely "a valuable ingredient in Reds' outfield alignment." That is a very roundabout way to say "bench player."

You would have to be a badass to pull off that color scheme and not get picked on after school.