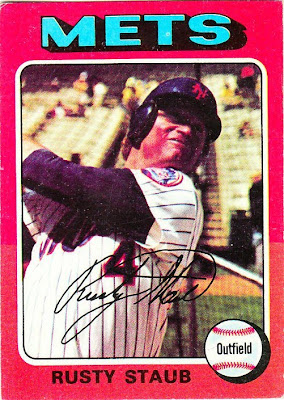 Card fact: This card image got overexposed or something. Staub doesn't really feature quite that rosy of a glow on his card.

What I thought about this card then: I believe one my friends had this card. Almost all of the Mets cards seemed cool to me. The Mets were king in 1975, at least where I lived.

What I think about this card now: Staub is doing a very convincing job of making believe he just hit a titan blast.

Other stuff: This is just Staub's second card since patching up his rift with Topps. After appearing on Topps cards from 1963 through 1971, he disappeared from the set for two years, emerging with a 1974 card. Apparently he would not sign a contract with Topps those two years. I've never heard why.

If you watch the Mets TV broadcasts featuring Keith Hernandez and Ron Darling, Rusty Staub gets brought up a lot. There is one story about Rusty's "meat wagon" that I hope I never hear again. 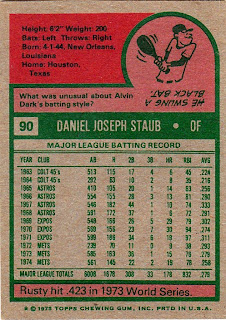 Back facts: Staub could hit everywhere he played. These stats don't include his later stops in Detroit and Texas, but he hit there, too.

Regarding the cartoon and Dark using a black bat -- well, isn't that cute? Dark? Black? Get it? I guess that why he ended up being a manager.

"Daniel Staub" doesn't have the same ring to it, does it?

Other blog stuff: How about a birthday? On this date in 1975, scrappy, gutty, gritty, (insert overused broadcaster cliche here), David Eckstein was born.
Posted by night owl at 2:25 AM

Aahhh I got to see Rusty play at the ending of his career and I always remember him being a rally good pinch hitter for the Mets...I started watching them regularly in '83 (.372 OBP as a pinch hitter that year, and a .404 in '85). Very valuable hitter off the bench even after he stopped being a regular fielder. Always loved him.

Rusty is one of the greatest trivia answers of all time. First man to DH 162 games, first (only?) player with 500 hits for 4 different teams, one of only two people (unless Griffey, JR joined the list) to hit a HR as a teenager and in their 40's

I think the rosy glow matches the border very nicely.