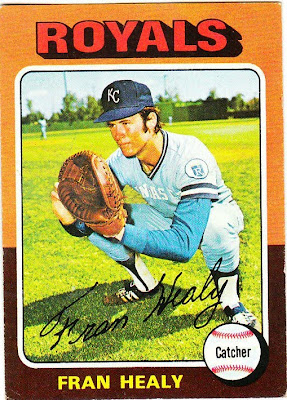 Card fact: This is the second appearance of Fran Healy in the 1975 set. His first appearance was entirely unintentional. ... I think.

What I think about this card now: Wow, Healy could really get low to the ground in that catcher's crouch. His elbows practically have grass stains.

Other stuff: I may not have seen the Healy card when I was a kid, but Healy was a big part of my growing up years. Since I lived in Yankee country -- before the days of 70 cable channels -- I saw a lot of Yankee games on WPIX, Channel 11. But I listened to even more games on the radio, because I had a radio in my bedroom, but not a TV. Fran Healy was a member of the Yankees' broadcasting crew in the 1980s and he seemed to be on the radio a lot more than on TV. Healy and Phil Rizzuto were quite a pair. Healy seemed a bit of a goof-head, like Rizzuto, but it made for interesting listening.

Healy later was a broadcaster for the New York Mets, and I saw him a lot on the old SportsChannel station, paired up with another colorful broadcaster, Keith Hernandez.

Even when Healy was a player, I heard a lot about him -- first from my Royals friend from Kansas, and then, after he was traded to the Yankees for Larry Gura, from my friends who were Yankees fans. Healy received notice with the Royals for catching Steve Busby's two no-hitters. And when he was with the Yankees, he was known as one of Reggie Jackson's few friends on the team.

He sure received a lot of publicity for a backup catcher. 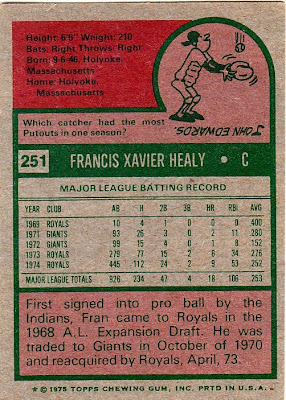 Other blog stuff: I have to say I'm enjoying the new template designer now that I've adjusted to it. I can get a better representation of the border colors up in the header. Just trying to serve you, the reader.
Posted by night owl at 12:35 AM

I do like the new header. It is definitely '75ish.

As for Fran, I had never heard of him until that one Yankees mini-series appeared on ESPN.

It's hard to believe anyone could be Reggie's friend. I wonder if Keith Hernandez ever fell asleep while Fran was in the booth with him. I like the new template too. I've been too chicken to play with mine.