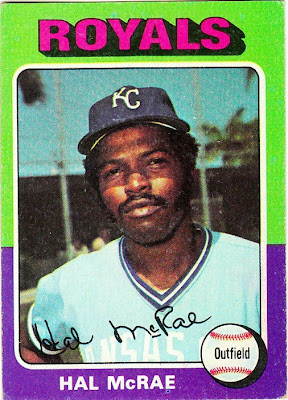 Card fact: This might be the first card I ever pulled from the first pack of cards I ever bought. It is between this card and another card that I haven't featured yet. I don't think I'll ever figure out which one it was, unless I undergo hypnosis.

What I thought about this card then: It's a rather bland card, but because it came out of that first pack, I studied it forever and thought it was a very cool card and McRae was a very cool dude.

What I think about this card now: It's rather bland. But I don't know whatever became of that original card.

Other stuff: Hal McRae was a key member of the Royals' pennant-winning teams of the late 1970s. Traded from the Reds partly because of his less-than-stellar fielding abilities, McRae blossomed as a designated hitter for the Royals and was known as a doubles machine. He finished fourth in the A.L. MVP voting in 1976 and was a three-time all-star.

After 19 years in the majors, McRae later became a coach and manager, managing both the Royals and the Devil Rays. He is now the video coordinator for the Marlins, and that's a bit interesting as his video tirade is one of the most well-known in sports history.

McRae is the father of former major leaguer Brian McRae, who played for the Royals, Cubs, Mets, among other teams. 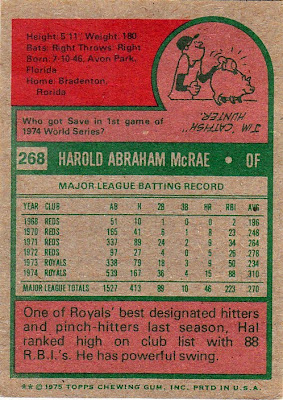 Back facts: McRae had 539 at-bats and 88 RBIs in 1974. It seems a bit odd to be mentioning his pinch-hitting abilities.

Other blog stuff: With this card, "green-purple" has officially tied "pink-yellow" for the overall color combo lead with 23 cards. But "pink-yellow" will bounce back soon.
Posted by night owl at 1:24 AM

Hal was on those Royals teams I remember when I first started watching baseball. Amos Otis, George Brett, U.L. Washington, Frank White. Whatever happened to the Royals?