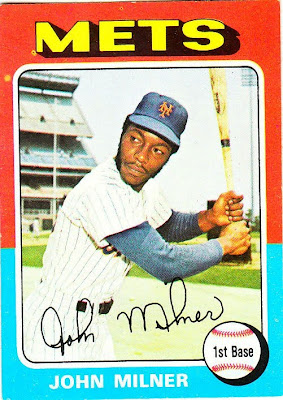 Card fact: OK, we have a doozy of a card fact for you today -- at least by my standards. Here it is:

This is the third of four straight cards in which John Milner is in the exact same pose. Topps had Milner pose the same way during the first four cards of his career. Here they are: 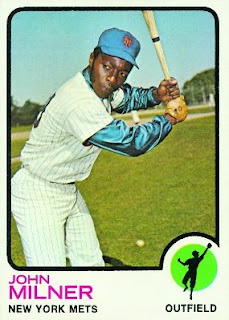 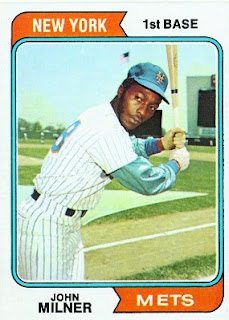 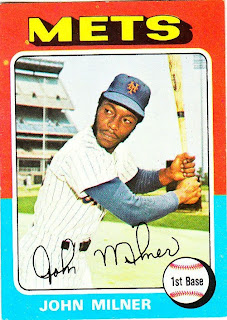 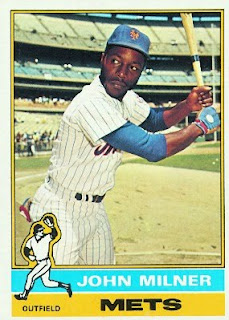 What I thought about this card then: I remember my friend -- the kid who had to have every Met AND Yankee card -- owned this card. Like most of the Mets cards of that year, it was cool because the Mets were still a cool team back in '75.

What I think about this card now: It looks a lot like the card of Milner from the previous year.

Other stuff: Milner was the Mets' regular first baseman in 1974, and he produced some decent power years for the Mets in the mid 1970s. His nickname was "the Hammer," just like another guy who played at that time. You might have heard of him. In fact, according to Milner's wiki page, Hank Aaron was Milner's hero.

Milner went to the Pirates in the huge four-team deal in December of 1977 that involved names like Willie Montanez, Al Oliver, Bert Blyleven and Jon Matlack. Milner became more of a role player and was a valuable member of the 1979 World Series champion Pirates, hitting .333 in the Series. Milner also played for the Expos.

He testified in the Pittsburgh drug trials in the mid-1980s, admitting to drug use. He died at age 50 from lung cancer. 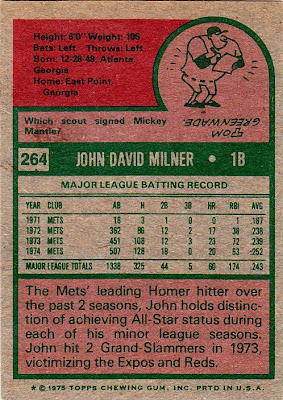 Back facts: Not only did Tom Greenwade sign Mickey Mantle, he also signed Hank Bauer, Elston Howard, Bobby Murcer and Bill Virdon for the Yankees. And he helped persuade the Brooklyn Dodgers to bring Jackie Robinson into the major leagues.

Other blog stuff: Wonder Woman, Lynda Carter, was born on this date. She is 59.
Posted by night owl at 1:07 AM

Apparently, Milner had a tendency to lose his batting gloves...

At least they didn't Ginterize him and use the exact same photo. Although, you could use those four cards in one of those "Spot the Differences" puzzles you see in kid's magazines. I think Lynda Carter as Wonder Woman was IT when I was a kid. Thanks for reminding me again that I'm getting old.

the last 2 cards are taken almost in the EXACT same spot on field.

I am assuming that is SHEA

aha, i spot a difference....75 is the only card he is not wearing a batting glove :)