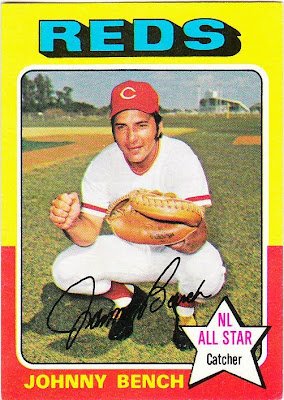 Card fact: This might be THE card of the 1970s. I know that's opinion, but I probably could write an essay on why it should be fact.

What I thought about this card then: I've said this several times before, but when I held this card in my hands as a 9-year-old, it had me so freaked out that I thought it would vanish, either via a gust of wind or by someone stealing it, or simply through spontaneous combustion. The card was just too cool to be possessed by someone like me.

I can remember where I was when I held the card. I was on a city street, standing in front of a store that had an awning over it. The only reason I would be at that particular site is because I was on my way home from the drug store after buying a pack of cards. So I must have been opening them on the way back and I pulled this card out of a pack. But I no longer own that Bench card that I pulled when I was 9. I must have traded it away. I was probably too freaked out by it.

What I think about this card now: For me, it's one of the iconic cards of the '70s. I know Bench's 1976 Topps card is great, but this one just means more to me. Bench has that catcher's crouch down pat, his glove looks like it just came out of the box yet it's perfectly broken in, and his signature is tremendous. Hell, I don't even like the Reds and I'm saying that.

Other stuff: Johnny Bench was at the height of his popularity at this point, one of the biggest stars in all of sports. I think, as a kid at that time, there were two sports figures that ruled above all others: Johnny Bench and Joe Namath. Later it would be Reggie Jackson and Roger Staubach, but Bench especially ruled right during the time that I became interested in baseball.

This was at the start of the Reds' back-to-back World Series titles and Bench had a kick-ass performance against the Yankees in 1976, so that just made him seem immortal.

Bench was also the closest thing to a sports TV star for me at that time, appearing on the Bubble Yum and Krylon Spray Paint commercials. He was always appearing on This Week in Baseball. Later, he hosted "The Baseball Bunch," but I was a teenager by then and too old for kiddie shows like that.

As for his playing ability, I could list his achievements forever. I think it's enough to say that he changed the perception of the catching position forever. 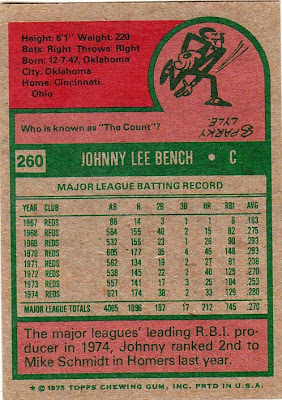 Back facts: I don't remember Sparky Lyle being referred to as "The Count." That was John Montefusco's nickname. Montefusco didn't have a card until 1976, though.

Other blog stuff: It's been 80 cards since we've had an All-Star. So I'm looking forward to adding another name to the All-Star list for 1974:

Johnny Bench was my favorite player when I was growing up. In the early 70s when I was really young I thought he was a place kicker for the Iowa State Cyclones football team (I grew up a few blocks from the Iowa State campus) and I was soundly ridiculed by the kids in the neighborhood for suggesting such a stupid thing. So I made it my goal to learn everything there was about this guy Johnny Bench so I would never again have to face such humiliation. It should have turned me into a catcher, but my parents couldn't afford to get me a regular baseball glove AND a catcher's mitt, so I only caught when I could borrow a friend's mitt when we were playing a pick-up game. In organized ball I never played catcher.

The reaction you had to the '75 Bench, as you described, is pretty similar to how I felt about the '76 Bench, which to this day is still my favorite card.

Hey, a little irony. I just noticed that the color combination on Bench's card is pretty close to the Iowa State colors. Same on the '76.

don't forget the johnny bench 'batter up'...i know that is probably florida spring training shot....i like to pretend it is taken in the midwest somewhere

just glancing at the background i see a grain silo ......awesome card....
johnny just seemed like a genuine nice guy....

I'll join the club - this is an awesome card, but 76T Bench is as close to baseball card perfection as it gets.