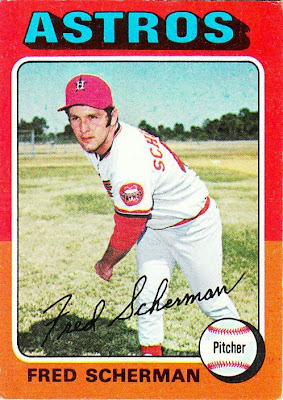 Card fact: This is Fred Scherman's final Topps baseball card in which he is not airbrushed into another uniform. He appears again in the 1976 set, airbrushed into a Montreal Expos cap and uniform.

What I think about this card now: They should have used red and orange for all of the Astros cards. It matches nicely.

Other stuff: Scherman was a relief pitcher during the first half of the 1970s. Most of his success came with the Tigers. He appeared in 69 games for Detroit in 1971, registered a 2.71 ERA and won 11 games. The following year, he helped Detroit to the ALCS and pitched two-thirds of an inning in Game 2 against the A's.

Scherman was traded to the Astros, then purchased by the Expos. His last season was 1976. 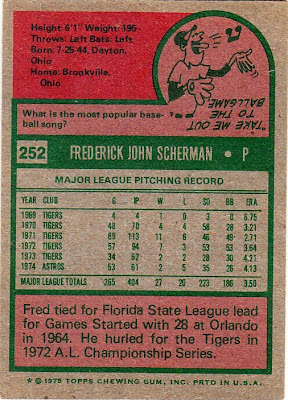 Back facts: A question like the one in the cartoon makes me want to spend the next hour researching whether "Take Me Out to the Ballgame" really IS the most popular baseball song. I mean you can't just make wild, unsubstantiated statements like that without demonstrating some kind of proof. You're opening yourself up for all kinds ...

Sorry, it's the journalist in me.

Other blog stuff: Today is former Royals player and manager Hal McRae's 65th birthday. I am less than two weeks away from featuring McRae's card on the blog. One of these days I'm going to post a card of a player on his birthday.
Posted by night owl at 1:16 AM

I'm a little partial to this one, http://www.youtube.com/watch?v=VXkPgjMHoQs, "It's a Beautiful Day for a Ballgame", by the Harry Simeone Songsters. As far back as I can remember WGN radio has played it before the Cubs games. It makes me think of the "Good Kid", Lou Boudreau and his long time partner Vince Lloyd.

Do you think even one person questioned that statement back then? Maybe it was true in 1975...maybe even today. I heard a good one at the Rockies game...when one Blake Hawksworth of the Cardinals pitchers balked they played "Baby, Come Back". Not a baseball song, but still funny.