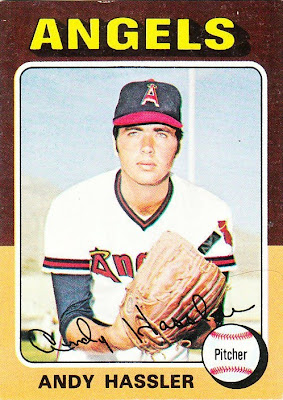 What I think about this card now: Yet another Angel in this set who is wearing a black arm patch. As Steve, from White Sox Cards, commented in the last Angels player post, the patch is in the memory of an Angels prospect, Bruce Heinbechner, who died in a car accident in the spring of 1974.

Other stuff: Hassler played 14 seasons for six different teams. Everyone can use a lefty on the mound. During the 1975 and 1976 seasons, he lost a franchise record 17 straight games. This was the time when the Angels had Nolan Ryan and Frank Tanana on the staff, so fans must have just thrown up their hands when it was Hassler's turn on the mound.

But Hassler had his moments. He pitched two one-hitters. He participated in the postseason with the Royals in 1976 and 1977 (losing twice to the Yankees) and the Angels in 1982. He also was on the Cardinals' NL championship team in 1985. 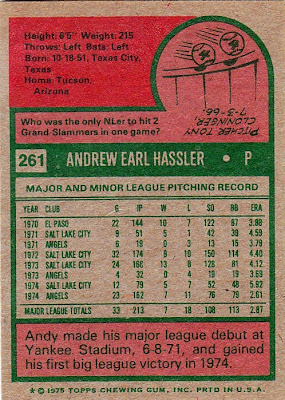 Back facts: Since this set came out, two other National Leaguers have hit two grand slams in one game. The first was the Cardinals' Fernando Tatis, who hit two in ONE INNING off the Dodgers' Chan Ho Park in April of 1999. What a sickening day that was. The second happened just last year, when Josh Willingham hit grand slams in back-to-back innings for the Nationals.

Also, in case you were wondering about Hassler's major league debut, he started the game against the Yankees, pitched four innings, allowed six hits, five walks, two runs and took the loss in a 3-0 defeat.

Other blog stuff: Today is the Mad Hungarian's birthday. Al Hrabosky turns 61.
Posted by night owl at 2:55 AM

That's a long time between his debut and his victory. I said this about a card the other day, but this one MAY have the most level background in the whole set. That pole is straight up and down. Hey, don't look at me that way...it's your fault I pay such close attention to the card photos now.

Last year on one of my fantasy teams I had Mark Buehrle on the bench when he pitched a perfect game. I promptly followed that up by benching Josh Willingham just in time for his two grand slams.

Chan Ho stinks. I wouldn't wish him on anybody's team. The Mad Hungarian was AWESOME!!!!!!

what the heck is the white pole above his left shoulder?? from this perspective that pole would have been gigantic.....it doesn't fit with background....this black patch appears to have writing on it