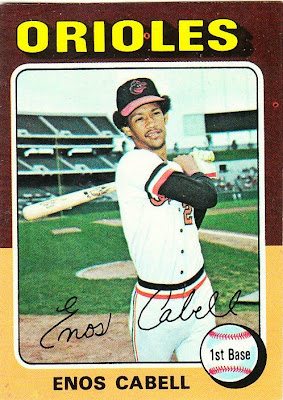 Card fact: This is Enos Cabell's first solo card. He appeared on one of those three-man rookie cards in the 1973 Topps set.

What I thought about this card then: Didn't see it. I remember when I acquired it as an adult that I thought he looked strange in an Orioles uniform. I had known Cabell mostly as an Astro.

What I think about this card now: I'm going to say that's old Memorial Stadium in the background. Having only seen the stadium from games on TV, I'm not sure. But I sure liked the look of the stadium from what I saw. Loved the row of homes beyond the outfield fence.

Other stuff: Cabell was a key part of the Houston Astros as the team grew into a contender in the National League West. He was the regular third baseman and delivered a lot of hits (the Astros gave him a lot of at-bats). He also played for the Tigers, Giants and finished his career with the Dodgers. Cabell was also among the players who confessed to drug use in the Pittsburgh drug trials.

But, for me, Cabell is the player at the center of the battle between "baseball people" and "sabermatricians." When I was a teenager, I started to read Bill James' annual publications that he put out in the early 1980s. I really looked forward to them each year. I found out that James didn't think much of Enos Cabell at all. This was around the time when the Tigers acquired Cabell and Sparky Anderson talked up Cabell's abilities. Well, James tore Sparky apart (he didn't like him either) and really bashed Cabell. He pointed out that Cabell didn't contribute a lot to the team when you looked at the stats. And when I look at Cabell's on-base percentage through the years, I can see that James was right. It's not good.

From that point on, I questioned what "baseball people" said about players and took a different look at stats and what was important to the success of a baseball team. I'm not a stat-head by any means, but it was the first time I realized that there was a different, and many times better, way of looking at a player's productivity.

Cabell is now an assistant to the general manager with the Astros. 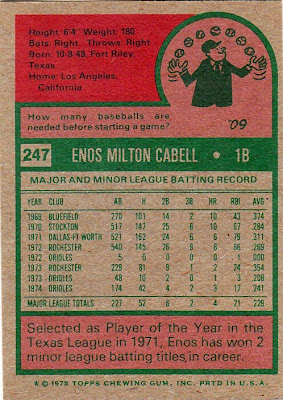 Back facts:  I wonder if more baseballs are required for games today. Some players seem to spend a half hour at the plate fouling off pitches.

Other blog stuff: Happy birthday to the Goose, Rich Gossage, who is 59 years old today.
Posted by night owl at 1:38 AM

I am not sure - I was only there twice for ball games and only once as an adult, but I don't think the upper tier extended that far beyond the LF pole at old Memorial.

But I cannot imagine what other stadium that would be either.

Definitely not Memorial - I believe it's Oakland?

(Seems like a ton of these shots were done in Oakland?)

I thought Oakland, too. The stadium is all over this set and it does look like that stadium. The thing that throws me off is Cabell looks like he's wearing a home uni.

For the uniform difference, all I can think of is that the flash may have over-exposed the grey uni. From whar I have seen, that is not Memorial.

I looked back at some old images of Oakland's stadium and it resembles it, but I couldn't find an exact match.

My first impression was that it was Oakland also.

i think another trivia question was how many balls are required for double header....96.....

I don't think you see umps checking balls like they use too....time were tough in the 70s....MLB has enough cash now to have unlimited i am sure