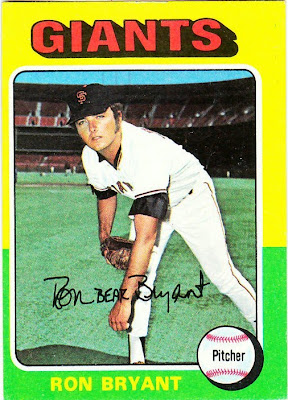 Card fact: This is the final card of Ron Bryant's all-too-quick career.

What I thought about this card then: Never saw it. Didn't know who Bryant was until decades later.

What I think about this card now: Well, I just noticed that he signed his name "Ron Bear Bryant." That's terrific.

Other stuff: Just like Jim Perry two cards ago, Bryant is one of those guys whose career ended just as I began to follow baseball and I never knew who he was until years later, when I acquired his card.

Bryant is known for putting together a terrific 1973 season for the Giants. He won 24 games and finished third in the Cy Young Award voting. But the following year, he was 3-15 with a 5.61 earned-run average. He was out of baseball by the end of 1975.

It turns out that Bryant suffered a major gash in his side, and it was said to have happened on a swimming pool slide. Apparently, Bryant was known to like his drinks and his parties, and maybe the two combined to create a career-ending incident.

But Bryant was an easy-going sort, and even though his career ended after 8 seasons, he ended up taking a job as a casino card dealer in Reno, Nev. 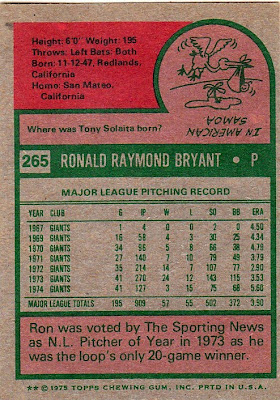 Back facts: Tony Solaita was a 1970s player for the Angels and Royals. We'll see him later in the set.

Also, notice that Topps wants no part of Bryant's 1974 season in the write-up.

And, just like Jim Perry, Ron Bryant was a switch-hitting pitcher.

Other blog stuff: In honor of today's Baseball Hall of Fame induction ceremonies, on this date in 1999, Nolan Ryan, Robin Yount, George Brett and Orlando Cepeda were inducted into the Hall.
Posted by night owl at 2:50 AM

That was a pretty decent class in '99. As in super. 38-19 in two seasons and then 3-15? I wouldn't have been surprised to see Topps leave that season off.