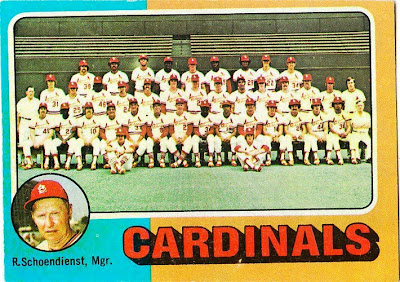 Card fact: This is the only team card in the set in which the first name of the manager also describes his team's primary color. How's that for fact? But I know it's true. There ain't no color called "Sparky."

What I thought about this card then: Next!

What I think about this card now: They couldn't have spared space for two more characters and typed "Red" instead of "R" in front of Schoendienst?

Other stuff: Red Schoendienst enjoyed fairly instantaneous success as manager for the Cardinals by leading them to the World Series in back-to-back years just three years into his campaign. Schoendienst remained manager for another decade. The 1974 team was actually fairly good, finishing second in the National League East. The offense definitely outshined the pitching. 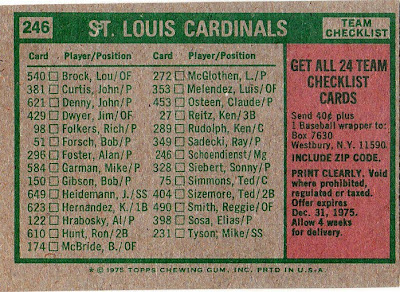 Back facts: There are three players on this checklist that didn't play a game for the Cardinals in 1974 -- Ken Rudolph, Ray Sadecki and Elias Sosa. Rudolph and Sosa arrived in an offseason trade with the Giants. Sadecki came from the Mets in a deal for Joe Torre in October 1974.

Other blog stuff: Let's see how Topps did representing the Cardinals team of 1974.

Topps didn't skip anyone noteworthy from that '74 team. Someone named Tom Heintzelman had 74 at-bats for St. Louis in '74 and didn't get a card. No biggie, except for Heintzelman's mom.

So here is where the Cardinals rate with the other teams examined so far, in terms of having the most players from their team represented in the 1975 set:

You know, I'm going to stick up for team cards. I always liked them, liked picking out the players (or trying to), liked seeing the stadium, liked the little differences like in 1980 when the Phillies posed without hats. Wondered why the Cubs always did that weird thing with the disembodied heads. Anyhow...

I like team cards too...
Red Schoendienst was the guy who triggered most of my trading with the "Old Man" from my hometown. He was a Cardinals fanatic.