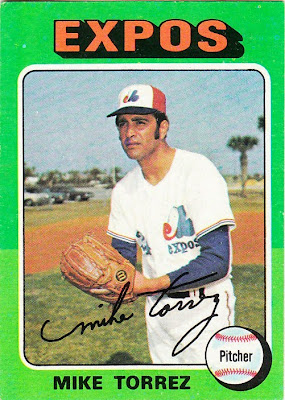 Card fact: The final card of Mike Torrez in an Expos uniform. But that's not saying much. He didn't stay with any team for very long. Just three seasons with the Expos.

What I thought about this card then: I had this card as a 9-year-old. I remember thinking that Torrez was cool, based on absolutely nothing except his baseball card.

Other stuff: Torrez pitched for 18 seasons with seven different teams and enjoyed success with all of them, except for maybe the Mets at the end of his career.

Torrez was involved in some of the more famous transactions of the 1970s. Some of the players that he was traded for during three separate transactions: Dave McNally, Rich Coggins, Ken Holtzman, Reggie Jackson and Dock Ellis. Torrez won 20 games for Baltimore in 1975, enabling the Orioles to trade him and Don Baylor to the A's for Jackson. The following year he was traded to the Yankees. Then, the next year he signed as a free agent with the Red Sox.

Torrez is probably most known for giving up the home run to Bucky Dent in the special playoff game between the Red Sox and the Yankees in 1978. Seeing that Torrez spent the previous year with the Yankees, I was practically convinced that he had arranged with his previous teammates to surrender the home run. Oh, I was pissed.

Torrez went on to spend more time with the Red Sox than any other team. According to his wikipedia page, he is now the pitching coach for the independent league Newark Bears. 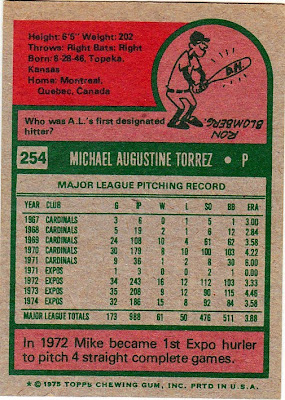 Back facts: There was no need to put "A.L." in the phrasing of the trivia question. We all know the N.L. is never going to adopt that still-dorky rule.

Oldie but goodie: Here is the original Torrez card that I pulled. I'm a bit hazy on where I got it. It might've been in a trade with one of my friends: 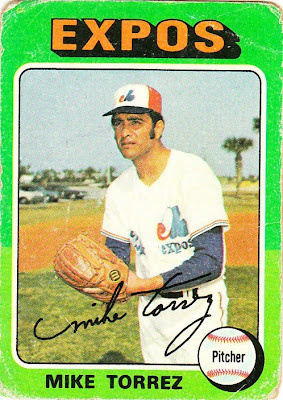 Other blog stuff: Today is Bill Cosby's 73rd birthday. Back in 1975, I knew him only as that guy who talked to all the cartoon characters on "Fat Albert." Hey-Hey-HEY! It's FAAAAT Albert!
Posted by night owl at 12:02 AM

That might be the card with the most level background in the whole set. I love the cars in the background. I still don't get the reasoning behind one league having the DH and one not having it.

The Fat Albert Show use to be a staple for me on Saturday mornings, right before This Week in Baseball, and then the Saturday Game of the Week. How GREAT were the mid 70's growing up as a kid!!!!!