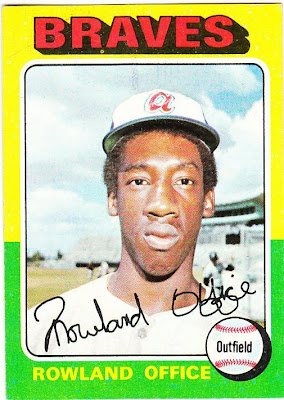 What I think about this card now: Where to begin? The first time I saw this card was when I was trying to complete the set about 5 or 6 years ago. I was at a collectibles shop thumbing through '75s in various conditions. I looked at the card, thought it was miscut and put it back. A time or two later, I was back in the store, came across the Office card, thought it was miscut and didn't buy it again. Then I was at a card show and saw the card and said to myself, "Hmmm, that's miscut, too. That must've been one of those cards that had that problem consistently."

Well, eventually, after viewing the card about a dozen times, I realized, "Hey, dumb-ass, the card isn't off-center. The SUBJECT is off-center." I can't believe it took me that long to realize that. But the fact is I simply wasn't looking for the subject to be off-center. It's pretty much expected that the subject would be centered, except, you know, on half of the cards in the 1969 set.

So combine the off-center photo with Office's rather goofy, quizzical expression and one of the best names of the 1970s, and you have one hell of a rookie card.

Other stuff: Office played 11 seasons in the majors, mostly for the Braves, back when the Braves were pathetic. He began as mostly a defensive replacement in the outfield because he had a lot of speed. But he put up some adequate offensive numbers -- at least by 1970s Atlanta standards -- to survive in the lineup. He signed with the Expos as a free agent after 1979 and his playing time decreased with a strong influx of young standout outfielders in Montreal. He ended his career with two games for the Yankees in 1983. 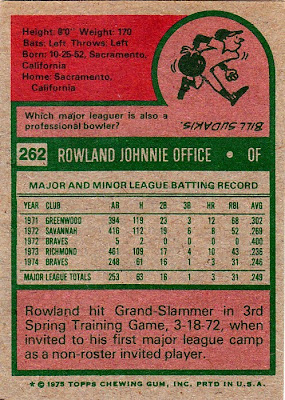 Back facts: It was the 1970s. You had to be a professional in two sports to make ends meet.

Baseball-reference.com says that Rowland's middle name is spelled with one "n,' as in Johnie.

Also, the write-up almost reads like an insult at the start. I mean, they're mentioning a grand slam he hit in a spring training game? But then you find out he was a non-roster invitee. That's a little more interesting. However, they didn't need to capitalize "spring training game," and they certainly didn't have to use the word "invited" twice.

Other stuff: On this date in 1975, Mets pitcher Jerry Koosman pitched a complete game and stole second in a 3-1 win over the Reds.
Posted by night owl at 3:24 AM

Did he borrow that cap from a local t-ball game?

They must have employed German interns to write the blurbs...no other way to explain the excessive capitalization of nouns.

That Office card was one of the very first '75 Topps cards I owned. Since I didn't get around to actually collecting until '79 I had to wait until '84 before one of my friend's brothers outgrew his collection and gave it to me.

Tying into a Night Owl post from yesterday...when I was given the '75 Office card, I was familiar with him because of the '81 Donruss card I had of him.

doesn't that look like a kansas city royal on his left shoulder??

i thought the off center aspect you were talking about was the cut at the top of the card....it appears like the top cut is the bottom of another card