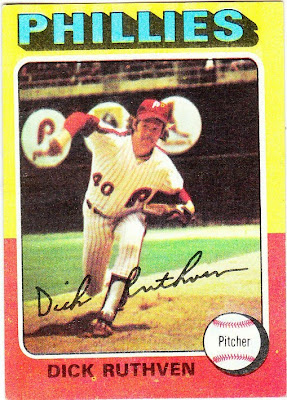 Card fact: One of the best action cards in the set. Yes, I know that's opinion.

What I thought about this card then: When I was 9, this was one of my favorite cards in the set, if not my favorite card in the set. It is one of the cards that caused me to root for the Phillies when they weren't playing the Dodgers.

What I think about this card now: I cannot figure out where Ruthven is in the park, or what he is doing. I'm guessing that is old Veterans Stadium in the photo. When I was young, I thought he was throwing a pitch on the mound. But it looks more like he is on the sidelines, as if he's warming up in the bullpen. As far as I can remember, Veterans Stadium's bullpens were behind the outfield fences. So I'm not sure where he is.

Other than that, I love the logos in the background, and it's nice to know that Ruthven could pitch with a club for a right hand.

Other stuff: Dick Ruthven came to the Phillies without ever pitching in the minors. He, along with Larry Christenson, were considered the up-and-coming pitchers of the early '70s that would join with Steve Carlton and help Philadelphia to the postseason. That turned out to be true, although Ruthven took a roundabout way to that point. He was traded to the White Sox and then to the Braves within a two-day period in December 1975.

But Ruthven returned to the Phillies in 1978 to held the team repeat as N.L. East Division champions. He lost Game 2 of the NLCS to the Dodgers. In 1980, he won 17 games and made the All-Star team for the eventual World Series champions. Later, he pitched for the Cubs, ending his career in 1986. 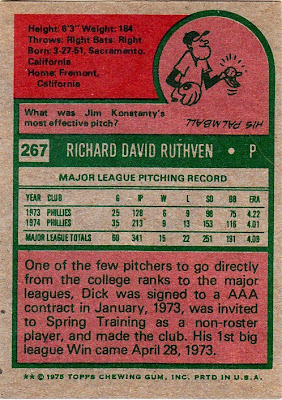 Back facts: You never hear much about the "palmball" anymore. ... Also, I continue to be amused by the capitalization of baseball terms like "spring training" and "win."

Oldie but goodie: Here is the state of the original Ruthven card that I pulled in 1975: 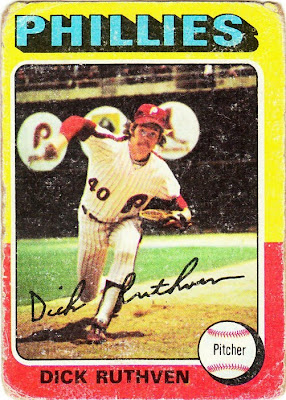 That is some wicked arm action. Do you think that is a "posed" action shot? I mean that the photographer got him to throw a pitch outside the first base line just for a photo.

One of my all-time favorite cards and from a pitcher who helped the Cubs win the 1984 NE East!

I always found this card striking because of all the weird lines and angles. It always looks miscut because of the way the bottom of the OF wall rises slightly going L to R and the Top of the wall does so even more so. Even his Fascimile Auto follows the Warning Track line.

The bullpens were beyond the OF walls at least post 1990- prior to that they may have been in different areas. I can't remember which OF wall had the NL team banners on it right now. may have to do some research.

Until now, I also thought this was a shot of Ruthven the mound. His arm action is a result of him throwing a screwball, his signature pitch. Looks painful, but an awesome shot!

that is an odd spot for a pitch...maybe we are all off and he is in some fielding action??

need to check all the phils cards and see if we can figure out the game....pin stripes would be phils at home

Funny you mention that he doesn't look like he's on the mound, and that you have also referenced certain players not "looking" like they played the indicated position. At the time, and based solely on this card and picture, I thought of Ruthven as a shortstop. It just looks like he's in the middle infield.