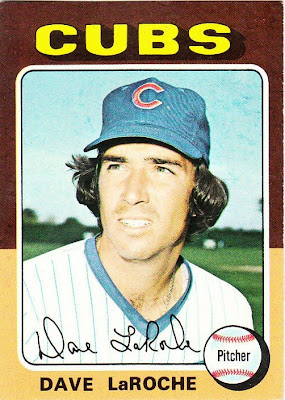 Card fact: I've got nothing, so let's start a tally on which teams come immediately after a checklist card. This time, it's a Cub. The last time, it was a Twin. More useless information, courtesy of the 1975 Topps blog.

What I thought about this card then: Well, we have a "dude looks like a lady" entry. We thought that long hair looked awfully girly, completely discounting the chest hair and the hint of a mustache.

What I think about this card now: Tough one. Not much to think about. And since I'm just staring at the screen, I'll move on.

Other stuff: Dave LaRoche was almost exclusively a relief pitcher for five teams during 14 years in the major leagues. His best seasons probably came with the Angels in the late 1970s.

In a famous story, which is on his wikipedia page, LaRoche was known as a complainer. One time, teammate Rod Carew got so fed up at LaRoche's whining that he challenged him to a fight. The two had it out in a broom closet in the clubhouse.

LaRoche also threw an eephus-style pitch, called "La Lob" during his career. He finished up with the Yankees and appeared in the World Series in 1981. He is now a pitching coach for the Blue Jays in the minor leagues.

LaRoche is probably most known now as being the father of two current major leaguers, Adam and Andy LaRoche. Andy used to play with the Dodgers, but now, because they've been traded so often and because they both share four-letter first names that begin with "A," I have a hell of a time keeping track of where they are or even who they are. This is why parents need to select names for their children that are distinct from their siblings. 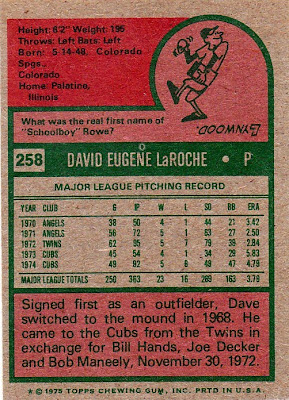 Back facts: I like the complete transaction details in the write-up at the bottom. Also, Lynwood is not a good name. I can see why he went by "Schoolboy."

Other blog stuff: On the other blog, I noted that I may have to change the color-combination attributed to the Dave Lopes card. It appears that the actual color combination on the card is "brown-orange" not "brown-tan." I apparently have a copy in which the orange color is faded. So I have changed the Lopes label to "brown-orange," so that the color combination standings are accurate.

Dave was a Wrigley Field bleachers fan favorite back in his days with the Cubs. I got his autograph one day by hanging my grammar school autograph book over the left field wall.

Dude looks like a hairy lady. I don't know if it's just that card or what, but I'm not fond of that color combo.