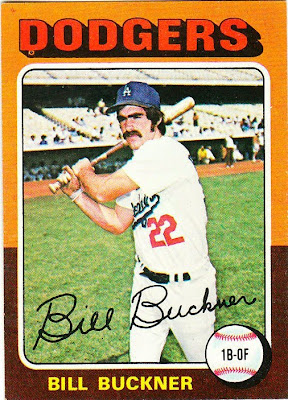 Card fact: This is a major mini run for me. This is the second of four straight cards that I also have in '75 mini form.

What I thought about this card then: I did not pull the Bill Buckner card during 1975. He was one of the Dodger cards I acquired a few years later when I had some spending money and could go to card shows.

What I think about this card now: Just a nice photo of a spring/summer day at Dodger Stadium. And Buckner has one of the truly great 1970s mustaches.

Other stuff: Thanks to one enormous gaffe in the 1986 World Series, Buckner's name is known by people who have never watched a baseball game in their lives.

In fact, because Buckner played for three of the major franchises in professional baseball -- the Dodgers, Cubs and Red Sox, he has to be among the most talked about players of his era.

Buckner was a standout contact hitter throughout his career, a batting average champion for the Cubs, who would have achieved even more than he did if not for injury problems. Before his time with the Cubs, Buckner regularly played the outfield and can be seen trying in vain to catch Hank Aaron's 715th home run in 1974. The Cubs stationed Buckner at first base where he remained for the rest of his career, including Game 6 of the '86 Series when Mookie Wilson's grounder went through his legs.

Buckner was hobbled by ankle ailments during his time with the Red Sox and viewed as something of a cripple in 1986. But when he was with the Dodgers, he was a speedy player and constant stolen base threat. 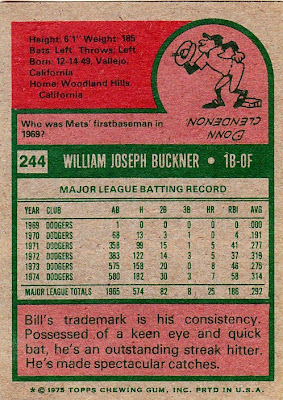 Back facts: "He's made spectacular catches." I'll leave that one alone. But I will tell you that "first baseman" is two words.

Other blog stuff: This is the fifth of 10 Dodgers cards that has featured a brown-and-orange border, a border better fitting the Giants. I think Topps is having a little fun with me.

It's unfortunate that Buckner is best remembered for that error. He had too nice a career for that to define him as a player. Also, I don't think Topps is having fun with you at all, I think they are downright mean.

You have to like the "bushy" eyebrows as well.