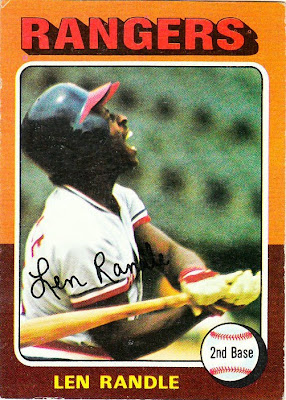 Card fact: Even though Randle did not have more than 250 at-bats in a single season until 1974, this was already his fourth Topps card.

What I thought about this card then: Well, I had the mini card and what a fantastic card it was/is. I don't think it ever crossed my mind to think what he was doing. If I had, I probably could have figured out it wasn't anything good.

What I think about this card now: Damn, Randle is disgusted! What did he just do? Did he foul out? Strike out? Get his pitch but not hit it square? I suppose he could be yelling in pain, but with his bat position it looks like he's reacting to a swing. It's certainly an interesting card photo.

Other stuff: Randle reached the majors in quick fashion, never playing lower than Triple A. He switched between the minors and majors until 1974, when he had a solid season playing at a variety of position. He was a regular starter from that point, but all hell broke loose in 1977.

Randle had been the regular second baseman until that point. But the Rangers went with rookie Bump Wills as the starter in spring training. During a meeting with manager Frank Lucchesi, Randle punched Lucchesi in the face, breaking the manager's jaw. Randle was fined and suspended 30 days and then traded to the Mets before his suspension ended.

I remember reading about this incident in the newspaper as a kid. I was too young to know about the Swingin' A's inter-team squabbles and fights. Instead, the Lucchesi-Randle incident, the Sutton-Garvey locker room fight, and the Martin-Jackson yelling match in the dugout were my introductions to the fact that players on the same team don't always get along.

Randle played for the Mets a couple of years, landing on another fantastic baseball card in the 1978 set. He also played for the Yankees, Cubs and Mariners. It was with Seattle in 1981 that he made "This Week in Baseball" immortality when he got on his hands and knees and attempted to blow foul a ball hit by Amos Otis. 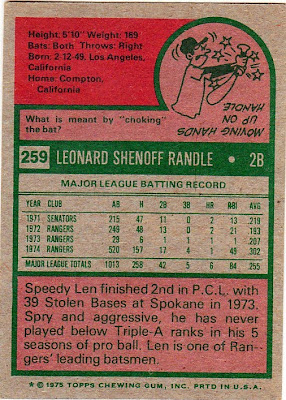 Back facts: Wow, that's a violent cartoon. Could Topps have known about Randle's future outburst?

Randle also made my all-middle name team. Completely made up of 1975 cards, of course.

Also, how often does the word "spry" make the back of a baseball card? 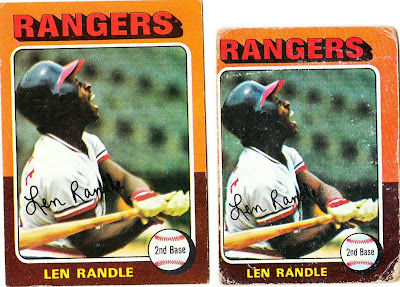 Here are the regular-sized card and the mini card side-by-side. I scanned them a little crooked unfortunately. As you can see, the mini I pulled out of a pack back in '75 had issues. So many miscut cards back then!

Other stuff: The No. 1 song in the country on this date in 1975 was "Listen to What the Man Said," by Paul McCartney and Wings. This man says, "my vacation is over." But there's another one coming in a week! Woo-hoo!
Posted by night owl at 12:43 AM

That is not a good color combo for the Rangers. Wow, I just realized there isn't one fan in the seats. I wonder if that's during BP? I think the cartoon fits great with the front picture and Randle's "escapades".

what an odd angle to even photograph len randle in. Switch hitter hitting left handed....it would make more sense to photograph him from 3rd base line....oddest action i have seen....
no one in the stands so it must be batting practice....i like the field hat under the batting helmet..looks like thee is yellow between his arms...maybe and oakland a in the background?