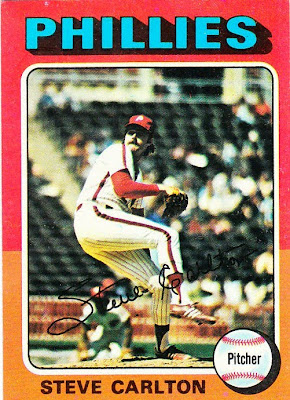 Card fact: One day after dropping into last place by itself, red-orange (the Burger King combo), re-ties brown-tan for the least number of cards with 7.

What I thought about this card then: I did not have it, although I think this is another one of those cards that I saw in that display in Cooperstown. I'm sure I thought it was one of the greatest cards I ever saw.

What I think about this card now: It is quite odd to see Steve Carlton with a mustache. He appears with a mustache on his 1975 and 1976 cards and that's it.

Other stuff: Hall of Famer Carlton is one of the greatest left-handers in any sport, and one of the best pitchers of all-time. "Lefty" was the all-time strikeout leader for a brief period in the 1980s before Nolan Ryan took the record for good.

Even though Carlton faced the Dodgers in too many important games AND didn't talk to the media, I couldn't help but hold some fascination for him. He was a great pitcher who marched to his own drummer, he was left-handed, and he played for my Plan B team. I was always happy to pull his card from a pack. 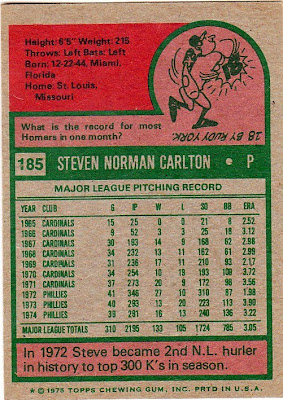 Card facts: Sammy Sosa now holds the record for most home runs in one month with 20 in June, 1998.

Take a good look at Carlton's 1972 season. I know just about everyone knows about that season, but the numbers are still incredible. One of the best seasons by a pitcher ever.

Apparently, the following season in which he lost 20 games touched off his practice of not speaking to the media. The line of questioning was apparently harsh and his unorthodox training methods were taken to task.

Other blog stuff: I went back and looked. This is the 10th in-game action shot in the set. Some are questionable, but the bar was low in '75.
Posted by night owl at 12:58 AM

The '72 numbers are still amazing and I shake my head when I look at them. He pitched 346 of a possible 369 innings in his 41 starts. That's a nice round 93.8%. Do you think the guys in the bullpen bothered to prepare for the possibility of pitching on the day's Carlton started.

The 93.8% might be the most amazing stat of all. That's ridiculously awesome.
Who do you think is the 1st baseman in the background? Montanez played the most, but I'd guess Hutton.

I tried to figure out who the player was behind Carlton but had no idea. You could be right.

I'm still amazed by Carlton's '72 stat that his 27 wins accounted for 46 percent of all the Phillies' victories that year. Also, he's the last guy to pitch more than 300 innings in a season (but that was in 1980).

Montanez was left-handed, and that guy appears to have a glove on his left hand, so maybe it was Hutton.

Still, his arms appear to be dark, and if he was wearing an undershirt, the sleeves would have been red.

Tony Taylor also played a few games at 1st base in 1974, but what are the odds that this photo was taken during those games?

I think it's a shortstop (Bowa?). Carlton's left-handed, so the left side of the infield would be behind him, not the right side. I think it's a shorstop rather than a third baseman because it looks like there's a trace of the Vet outfield wall in the background.

Good call on the left-side of the infield. I didn't even consider that.

This is not at the Vet though. The seats appear to be black, and in the 1970s, the lower deck seats were various shades of tan and brown.

I'd say that was Schmidt, because he doesn't look scrawny enough to be the early-70s Bowa.

The Philadelphia Phillies were my worst nightmare back in the day. They used to ruin every game they played against my Expos... Especially when Carlton was pitching... Steve Carlton, Greg Luzinski and Mike Schmidt used to bring endless disappointment!
I had this card.