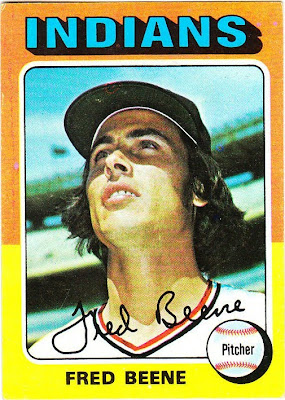 Card fact: This is the final card of Fred Beene issued during his major league career.

What I thought about this card then: I didn't have it and neither did my brother or my friends. I do remember seeing it somewhere, perhaps when we made a trip to the Baseball Hall of Fame and the entire 1975 set was displayed before me. I know we would have had a field day with the last name, the longish hair, the look off into the distance.

What I think about this card now: Beene is airbrushed into an Indians uniform. He is most likely a Yankee in this photo.

Other stuff: This is the second straight post about a guy who was rather short for a major leaguer. At 5-foot-9, Beene endured constant questions about his height. He played in the Orioles organization, but struggled to break through since the O's had such great pitchers in the late '60s/early '70s. Eventually, Beene was traded to the Yankees. He enjoyed a strong 1973 season out of the bullpen, but was traded to the Indians early in the 1974 season.

That deal, which sent Beene, Fritz Peterson, Steve Kline and Tom Buskey to Cleveland for Chris Chambliss, Dick Tidrow and Cecil Upshaw, apparently enraged the Yankees players who thought management was breaking up a great group. But the deal turned out very well for New York. (Topps was not able to get a photo of Beene as an Indian, even though he was traded to the team nearly a year before the set was issued. A pretty common problem back then).

Beene suffered arm trouble and didn't play in the majors past the 1975 season. He later served as a scout and was the guy who got Jim Morris signed to the Brewers. Morris was the player who quit baseball due to arm issues then came back 10 years later, made his major league debut for the Devil Rays at age 35, and was later played by Dennis Quaid in the movie "The Rookie." 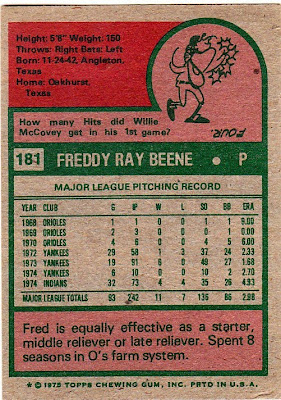 Card facts: He is listed as 5-8 on the back of his card, but I've seen him mentioned as 5-9 elsewhere. ... I think "Spent 8 seasons in O's farm system" isn't exactly a career highlight.

Other blog stuff: If you want to read a detailed account on Beene, here it is. It sure came in handy. I haven't found stuff even half as complete for players far more accomplished than Beene. I guess that's what happens when you were a Yankee.
Posted by night owl at 1:23 AM

No "Dude Looks Like a Lady" mention? I think he qualifies. I would love to see the whole '75 set laid out before me. That must have been cool. I just watched "The Rookie" with my kids...

I threw the "dude" reference in the labels. The Captain might come down on me again :)

this was one of the "booby prizes" when we had flipping competitions. Between the last name and the long hair this card was made fun of a lot.

Funny timing night owl, I literally just posted my Fred Beene autograph over the weekend and linked to the same site. It is very interesting how much information is available about Fred, considering his short career.

Fred Beene is my uncle.