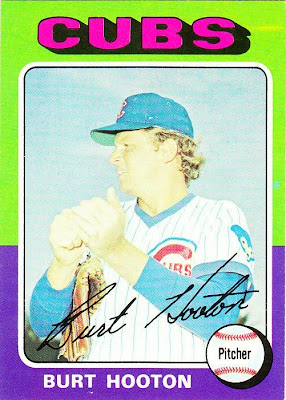 Card fact: This is Burt Hooton's final card as a Chicago Cub.

What I thought about this card then: Not familiar with it.

What I think about this card now: Look at all the head room in the photo. It reminds me of the early 1980s Fleer shots in which some players looked abnormally short because of all the dead space above the player's head.

Other stuff: Hooton was one of the few major leaguers to never pitch in the minors. The Cubs started him the majors in 1971. Hooton threw a no-hitter in his fourth major league start in 1972, but he was best known as a regular starter for the Dodgers.

Hooton pitched in several notable postseason games for Los Angeles. He gave up the first of Reggie Jackson's three home runs in Game 6 of the 1977 World Series, and he was the NLCS MVP when the Dodgers beat the Expos in 1981. I remember him specifically for his start in Game 3 of the 1977 NLCS against the Phillies. That series was my first experience with my favorite team playing in the postseason. And that game was my first experience with a pitcher having a meltdown under pressure.

Hooton walked in three straight batters in the bottom of the second inning to turn a 2-0 Dodgers lead into a 3-2 Phillies lead. I was beside myself. Fortunately, that was also the game in which the Dodgers, down to their final out, rallied for three runs to win the game 6-5 and go on to take the series.

Hooton, now a pitching coach in the Astros organization, is also the only guy I remember throwing the knuckle-curve. Apparently, Jason Isringhausen also threw it and there is a variation of the pitch that several current players throw or have thrown, including Cliff Lee and Justin Verlander. But you couldn't watch a start by Hooton without the announcers talking about the knuckle-curve pitch.

Hooton was nicknamed "Happy" by Tommy Lasorda because Burt didn't smile much.

Oh, and it drove me nuts when people would spell his last name "Hooten." 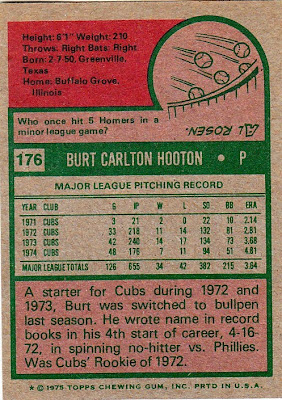 Back facts: The write-up alludes to Hooton's poor 1974. He was traded to the Dodgers for Eddie Solomon and Geoff Zahn. Neither did all that much for the Cubs. Zahn turned out to be a good pitcher, but that was after he left the Cubs.

Other blog stuff: This is the second straight green-purple card. "Green-purple" is about to make a major run in the next 25 or so cards. Let's see if it can catch "orange-brown" and "green-light green" for the lead.
Posted by night owl at 12:52 AM

The sun must have exploded that day...or Topps didn't do a great job developing the picture. I almost needed shades to look at it. 5 homers in a minor league game is a pretty nice day at the park.
Verification word: cooties....that's just wrong.