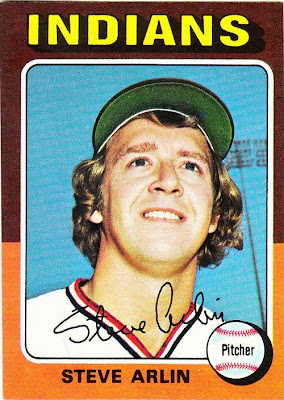 Card fact: This is the last card of Steve Arlin during his playing career.

What I thought about this card then: I vaguely recall someone else having this card. One of my friends perhaps. And, I remember being unsettled by Arlin's long hair. I didn't utter the actual words "dude looks like a lady," but only because Aerosmith didn't release the song until 12 years later.

What I think about this card now: This is a quintessential '70s card. Crazy colors. Airbrushing. Long hair. Player looking to the sky.

Other stuff: Steve Arlin played on the earliest of Padres teams and his stats showed it. San Diego apparently leaned on him heavily, because he pitched over 200 innings in 1971 and 1972 and led the league in losses each year (19 and 21, respectively).

Arlin was traded to the Indians in June of 1974, which apparently was still too late for Topps to get a photo of him in an Indians uniform for a 1975 set. He pitched in just 11 games for Cleveland in '74, and his career was over by the time this card came out. According to his wikipedia page, he then became a dentist. 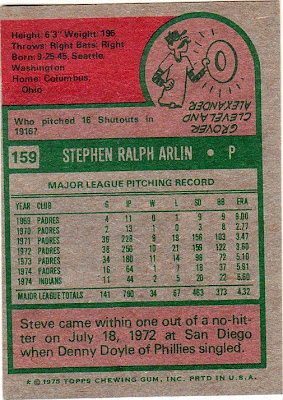 Back facts: Note the write-up at the bottom. Arlin remains the pitcher who came the closest to throwing a no-hitter for the Padres, coming within an out of doing so. Only the Mets have gone longer without having a pitcher throw a no-hitter.

Other blog stuff: Way back when I pointed out a cartoon and said the person referenced in the cartoon had a grandson who appeared in the set. Arlin is the grandson.

I think that light pole may have fallen over on him....leave it to Topps to get a tilty sky shot.

Most of the kids in my neighborhood had shortish hair. And there were always those kids who would get their heads buzzed for the summer (I wasn't one of those kids).

There were some kids who had longer hair, but the majority of the boys wore it short. The longer haired boys stood out -- not just from my perspective either (I'll spare you a story illustrating the point).

I find it unsettling that we are almost twice as far away from "Dude Looks Like a Lady" now as the song was from this card.

Time is moving much to quick.