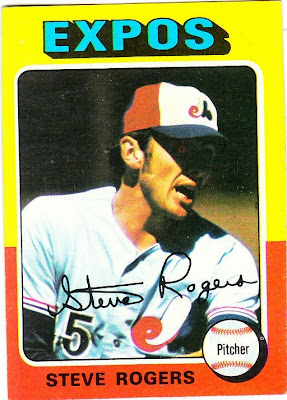 Card fact: The third straight yellow-red card of a player in the shadows. The previous two were Willie Montanez and the Bert Campaneris all-star card.

What I think about this card now: A couple of things. First, it's one of those awful shots where you can't see the player's face. I can't even tell what Steve Rogers is doing in this photo. Is he trying to pick off someone at first base?

Secondly, early cards of Rogers look odd to me, because I always knew Rogers with a mustache. This seems like another man.

Rogers was one of those pitchers that the media would always call underrated. ABC enjoyed doing that during the 1981 postseason. They talked the Expos up and they talked Rogers up. And then Rogers came on in relief during the final game against the Dodgers and gave up the winning home run to Rick Monday. I was very happy.

But even though former Expos manager Dick Williams disparaged Rogers' ability in a book, Rogers was in fact one of the better pitchers in the National League in the early 1980s. 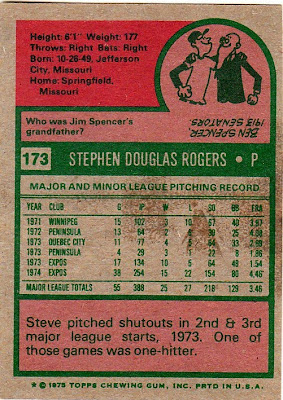 Back facts: Losing 22 games in one season is crazy. Rogers, Randy Jones and Bill Bonham all lost 22 games in 1974, and no one has lost as many games in a season since.

As for the cartoon, Jim Spencer was a 1970s player that we'll see later on in the set.

22 losses is amazing. 37 decisions in 38 starts is also amazing.

A great pitcher who was underrated because the team behind him was simply not good enough to go against the Phils and Pirates of the day. Those teams were machines, and we didn't have what it took to beat them.
Rick Monday is a four letter word in Montreal :-)