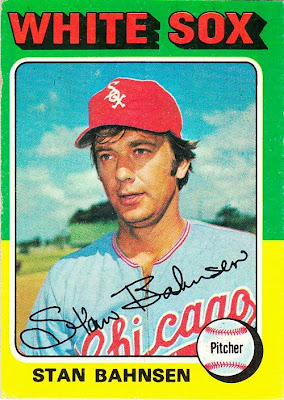 Card fact: "Stan" appears to be a pitcher's name. Yes, I know there was Stan Musial, but the majority of the other Stans to make the majors have been pitchers: Stan Belinda, Stan Coveleski, Stan Williams, Stan Wall. Notable hitters: Stan Lopata, Stan Javier.

What I thought about this card then: Never saw it. At least I think I didn't. It's not a very memorable photo.

What I think about this card now: Nice puffy clouds? Not much coming to mind. Bahnsen is one of those guys who I never paid much attention to even though he was still playing into the early '80s. I'm still not sure how to pronounce his name.

Other stuff: Bahnsen caught the attention of a lot of fans in 1968 when he won American League Rookie of the Year honors for the Yankees. But a few years later, the Yankees were trading Bahnsen for Rich McKinney (who?). Bahnsen won 20 games his first year with the White Sox, then lost 20 games the following year. He missed a no-hitter against the Indians in 1973, allowing a single with two outs in the ninth.

Later, he was exclusively a reliever for the Montreal Expos. 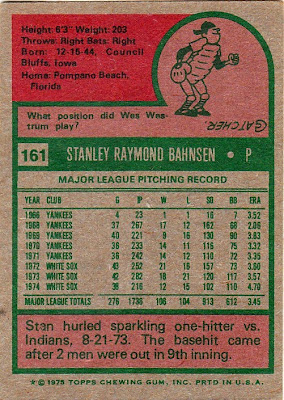 Back facts: You may be asking yourself: why the random reference to Wes Westrum? Westrum became manager of the Giants in mid-season of 1974. ... Also, you see the reference to the near no-hitter. But "base hit" should be two words.

Other blog stuff: Now that I've made the "yellow-green" color combo the "lemon-lime" design, I'm still looking for a name for the "green-yellow" combo. It's one of only a couple that doesn't have a name yet. I may have to put up the first-ever poll on this blog to decide this one.
Posted by night owl at 2:15 AM

Walt Williams got the hit off Bahnsen in the 9th inning.

That card would fit in with your "Working hard and sweating" series you posted once when work was getting you down.

1968 was my first year following baseball. I grew up in NY, and it was a pretty dismal year for the Yankees, with Bahnsen being one of the few bright spots, so he was a pretty big deal, but was still overshadowed by the Mets rookie pitching phenom that same year, Jerry Koosman. Bahnsen became a kind of perennial disappointment to the Yankees after that, because they kept waiting for him to take the next step and become a super star ace pitcher. He never did.