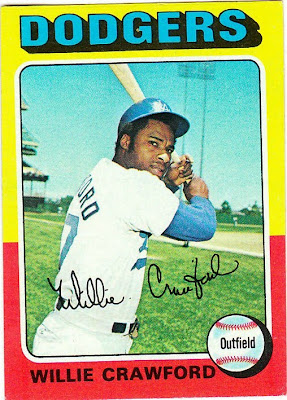 Card fact: This is the second straight Dodger card of a player who is no longer with us. Willie Crawford died at age 57 in 2004.

What I thought about this card: I thought it was quite cool. Crawford's tilted helmet made the whole card. I'm not sure what happened to my original card. It's possible I upgraded this card at a young age and scrapped the original.

What I think about this card now: One of the most severe tilts on a background that I've seen so far. Of course, I scanned the card in tilted so I'll just shut up about that.

Other stuff: Crawford was one of the best high school athletes to come out of Los Angeles. He was a big football standout and many football colleges came after him. But baseball did, too. Nobody pursued him more than Charlie O. Finley and Tommy Lasorda.

Can you imagine being 18 years old and having those two guys talking your ear off? Finley was the owner of the Kansas City Athletics and Lasorda was a scout for the Dodgers. Lasorda won, signing Crawford two days after he graduated from high school. Crawford never played in the minor leagues, and was in the World Series the very next year.

He never reached the lofty expectations people held for him. He was expected to become a star of Willie Mays stature, but he struggled to find playing time year after year. His frustration with that led to an alcohol problem that he eventually kicked after his playing career ended. Crawford spent 11 years with the Dodgers, then was traded to the Cardinals, where he spent one season. He was then traded to the Giants and is pictured in an airbrushed Giants helmet on his 1977 card, but he never played for them. He finished out his career with the Astros and the A's.

After returning to the Dodgers for the 1978 season, he didn't make the team and retired at the age of 31. 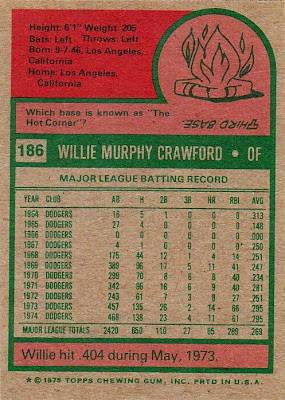 Back facts: This was one of my favorite cartoons from the set. A base that's on fire! Loved it.

Other blog stuff: On this date in baseball history, in 1974, Pirates pitcher Dock Ellis intentionally hit Pete Rose, Joe Morgan and Dan Driessen, then threw two balls behind Tony Perez's head before walking him. Manager Danny Murtaugh then took Ellis out of the game before he did anymore damage.
Posted by night owl at 12:59 AM

Crawford did play in the minors. Just not in 1965.

Maybe Murtaugh removed Ellis before his next at-bat (payback time!)

To expand on the first comment, although Crawford played in the majors every year starting with his first pro season in 1964, his time in the majors in '64, '66 and '67 was just as a September call-up. He otherwise spent those seasons in the minors (he was also in the minors for part of '68).

Crawford spent the entire 1965 season in the majors because he was a bonus baby. He was part of the last class of bonus babies before that rule was rescinded for good with the introduction of the entry draft. According to an article on the bonus rule that I saw a while back, he was the only African-American ever to be a bonus baby.

As for Dock Ellis, the story I remember hearing is that he was ticked off at the Reds for some reason, and decided to bean every one of their players the first time through the lineup. He didn't stay in the game long enough to finish what he started, though....

Thanks for clearing that up guys. I don't know what I was looking at.

That's one difference between the game of today and in Dock's day. Now both benches would be warned after the second hit batter and the pitcher would be gone after the next and so would the manager.

I played junior high school flag football against Willie, Jr. He was an absolute man among boys. He was all thighs and he ran hard and most often in a straight line just daring defenders to get close enough to grab his flags. He scored several touchdowns that day.