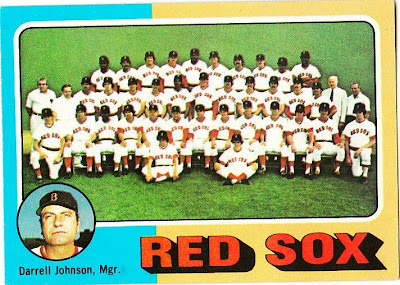 Card fact: This is Darrell Johnson's first appearance on a card as a manager. He was promoted from Triple A Pawtucket to manage Boston for the 1974 season. He would lead the Red Sox to their first World Series appearance in eight years in 1975.

What I thought about this card then: No memory of it.

What I think about this card now: It's an interesting team photo. Unlike the traditional straight-on shot, the camera man shot the team from above at an angle. I like it.

Other stuff: Johnson was manager of the Red Sox for just two-and-a-half seasons. He was replaced midway through the 1976 season by Don Zimmer after Boston went 41-45. He would later become the first manager in Seattle Mariners history. 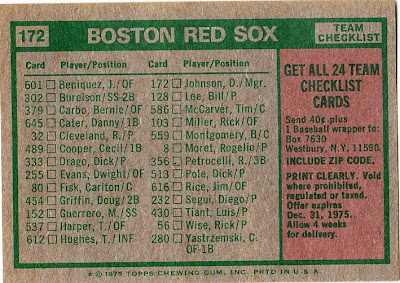 Back facts: Red Sox rookie Fred Lynn is featured in this set on one of the four-photo rookie cards, but he is left off of the checklist.

Other blog stuff: Let's see how well Topps did representing the 1974 Red Sox in the '75 set:

There were 37 players to suit up for the Red Sox in 1974, a pivotal year in the team's return to prominence. Topps featured 26 of those players in the 1975 set, which is pretty good.

The most unfortunate absence in the set is Juan Marichal, who pitched in 11 games and went 5-1 in 1974 with the Red Sox. Marichal would return to the majors for the 1975 season, albeit briefly, with the Dodgers. He pitched in two games. It sure would have nice to see Marichal in the 1975 set.

Also missing is Dick McAuliffe, who had 272 at-bats in 100 games for the Red Sox. But McAuliffe took a job as a Red Sox minor league manager for the 1975 season. The Red Sox returned McAuliffe to the field in September of 1975, and he played for Boston in seven games before retiring for good. Bob Veale also pitched in 18 games for the '74 Red Sox but that was his final year.

So the Red Sox fair pretty well in the percentage of players represented in the set. Here are the updated standings:

Are the two guys sitting on the ground players? If so, they must have loved that...it would be like sitting at the kid's table at thanksgiving when you're an adult.