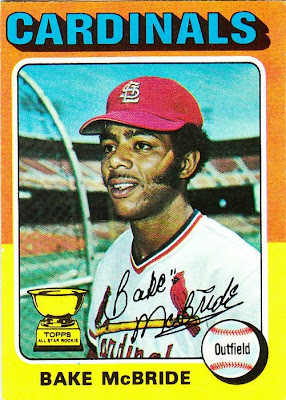 What I thought about this card then: You are looking at one of my favorite cards in the set when I was a kid. I remember pulling this card after a trip to the drug store with my friends when our family was on vacation. It instantly became one of the few cards that I had that was "untradeable."

What I think about this card now: It's a nice photo and a good look at old Busch Stadium. As for McBride's autograph, I'm wondering where the first quote mark is. Perhaps it's lost in the cardinal on McBride's uniform.

Other stuff: McBride was the National League Rookie of the Year for his performance in 1974. He was known for his speed, base-stealing and hitting ability. He enjoyed some solid seasons for the Cardinals and Phillies. He was traded before the 1982 season to the Indians and suffered through an eye issue that cut down on his playing time. By 1984, dealing with knee issues that plagued him during his career, he tried to return to the majors with the Rangers, but ended up retiring at age 34.

To this day, McBride is the player I point out when I mention that players back in the '70s and early '80s were much skinner than they are today. If you ever get a chance to see old footage of the Phillies or Cardinals from back then, you'll know what I mean. McBride has about a five-inch wide frame but stands 6-foot-2. 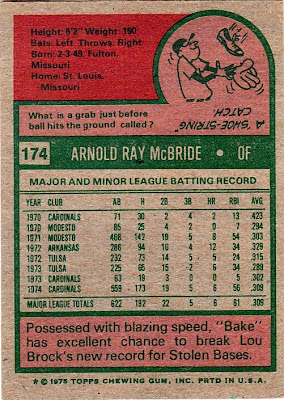 Back facts: Two things from my childhood: 1. McBride's 1974 stat line impressed me very much as a kid and was one of the factors that made the player a favorite of mine. 2. I have known McBride's real name is "Arnold" for a long, long time.

One other thing: What kind of mind game was Topps playing on McBride? That is some kind of pressure, saying that a rookie is a threat to Lou Brock's freshly made single-season stolen base record!

Other blog stuff: Time to plug in an outfielder on the Topps All-Rookie team for 1974:

I can see why he went with the nickname, but where did it come from?

Near as I can tell, "Bake" was short for "Shake n' Bake," which described his playing style.

When I was in high school there was a grumpy old librarian named Mr. McBride. My brother and I started calling him "Bake" (or Bake") and pretty soon it caught on. Everybody started calling him Bake. He didn't know why students called him that but in enraged him.

Ok....I can buy that explanation.

That's Candlestick Park, not Busch Stadium. Around 1971, Topps hired a photographer named Doug McWilliams, who was from the Bay Area. So when teams passed through Oakland or SF, he'd take their pictures for Topps. He's now donating all his pix to the Hall of Fame; I'm going once they make the exhibit.

That's why you'll see half of a team in a given year shot at the same stadium and probably the same game. Take a look at the Rangers from 73, 74, 75, or 76 - one of those years, they all pose in the same spot at the Coliseum one after the other. The sunlight and background are the exact same. Another example is the 73 Reds at Candlestick. 73 Garvey and others are at the 'Stick. The list goes on and on.

I’d say that Bake McBride is most famous for scoring the winning run in that 25 inning game the Cardinals and Mets played at Shea Stadium In 1975. Didn’t happen to catch that game on TV, but it was supposed to be a mad dash around the bases by McBride. The game ended after 3 AM, so I guess he just decided to put an end to it.