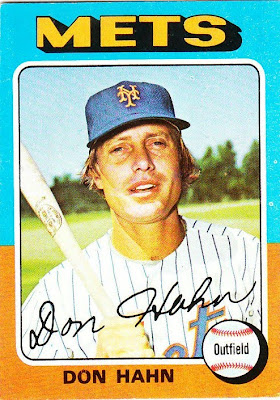 Card fact: This is the final card in Don Hahn's major league career.

What I thought about this card then: When I was trying to complete this set back in 2004, I came across this card and the memories of me and my brother being horrified by Hahn's appearance came rushing back. I had completely forgotten about the card. I believe I may have let out a laugh when I saw It again.

Other stuff: Hahn's career consisted of six years of part-time duty. The only season in which he came close to being a starter was 1974 when he had 323 at-bats in 110 games. He came up with the Montreal Expos and was in center field for the Expos' very first game.

Wikipedia mentions the game and, in one of its less kind moments, says: Hahn's first major league at-bat came in the second inning of the game; he struck out, which pretty much set the tone for his career.

Come on, give the guy a break.

Hahn didn't play for the Mets in 1975, but did play for three teams in his final year -- the Cardinals, Phillies and Padres. 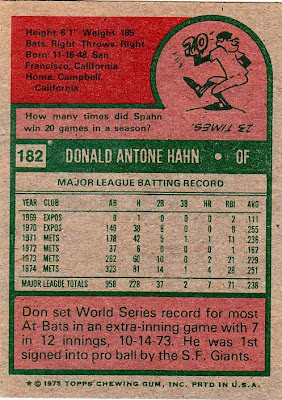 Back facts: Hahn still holds the record for the most at-bats in a World Series game. His seven at-bats came in Game 2 of the 1973 World Series. The Mets beat the A's 10-7. Hahn went 1-for-7 and drove in a run.

Other blog stuff: Astros third baseman Pedro Feliz was born on this date in the very year we are celebrating. Happy 35th to Mr. Feliz.
Posted by night owl at 2:22 AM

Great border for a Met. Would have been great to use it for all the Mets, but then, of course, it wouldn't be 75T if they did.

And is it just me, or does Hahn look like he's saying, "Duuuuuuuuuuuuuuude"?