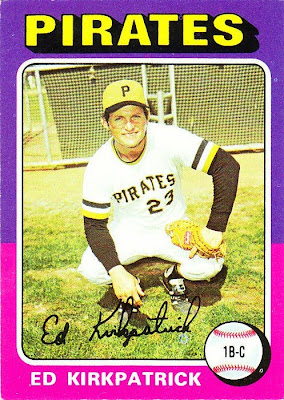 Card fact: Not much to relate here. But I always found it interesting how the Pirates had two back-up catchers in the mid-1970s, both named Ed, one with a really long last name of Kirkpatrick and one with a really short name of Ott. Little things amuse me.

What I thought about this card then: I remember this being in my collection at one point and the screen behind Kirkpatrick looked very imposing to me. I don't know why.

What I think about this card now: It's actually a nice shot. Kirkpatrick looks friendly and it's a sunny day. I don't know where I got the doom and gloom when I was a kid.

Other stuff: Kirkpatrick was a career backup catcher/utility infielder, but did spend the early 1970s as the primary catcher for the expansion Kansas City Royals. He lasted 15 years in the major leagues with a career average of .238, so I am assuming he was useful in the field.

Kirkpatrick was involved in an automobile accident in 1981 that left him in a coma for more than five months. He suffered paralysis that has confined him to a wheelchair. 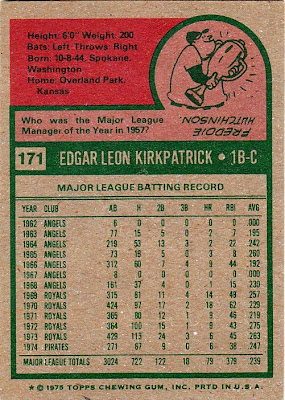 Back facts: I'm guessing Freddie Hutchinson was a big man? I'm not sure why they portray him as so large in the cartoon. Hutchinson won the 1957 award with the Cardinals, but is known more for helping the Reds to the World Series in 1961 and then being stricken with lung cancer prior to the 1964 season. He managed the team until August of that year, then resigned in October, dying three weeks later. The cancer treatment center in his name is one of the most renowned of its kind in the world.

Other blog stuff: Birthday greetings to my father. He shares his birthday with Milton Bradley, of all people. He'd have a thing or two to say about him.
Posted by night owl at 3:06 AM

A lot of tragedy associated with that card. Kirkpatrick's accident and Hutchinson's cancer. Milton Bradley. Wow. What a downer. I'll brush that aside to send along birthday greetings to your dad!

baseball-reference.com lists Hutchinson at 6'2" and 190 pounds. Not a small man, but certainly not worthy of being a cartoon-fatty.