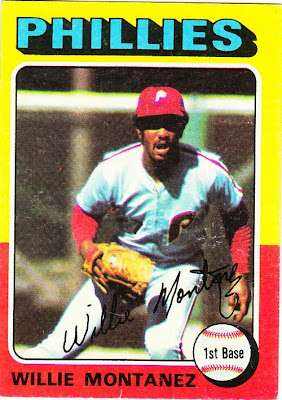 Card fact: This is one of several cards in which the photo was taken in San Francisco's Candlestick Park. To this day, a lot of Topps photos are taken in San Francisco. I'm guessing Topps has connections to photographers in that area. But I don't know the whole story. If anyone does, I'd be happy to hear it.

What I thought about this card then: I never saw it. But if I did, it'd be a favorite, because of the wonderful, off-centered action.

What I think about this card now: The photo is off-center. It's actually a crappy action shot.

Other stuff: Willie Montanez was a decent hitter who is known more for his flamboyant behavior on the field. Nicknamed "Hot Dog," Montanez's most famous maneuver was snatching balls out of the air while playing first base, then bringing his glove to his hip and acting like he was putting a gun back in its holster.

He also would repeatedly tag base-runners with the ball when the pitcher threw back to first base. He would trot slowly around the bases on home runs, employing the stutter step when he approached a base. He would flip his bat. He had quite a few habits, I don't know if he ever explained them. 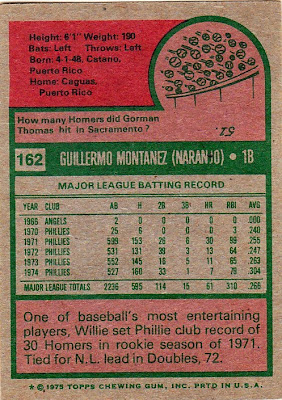 Back facts: Awesome. A cartoon mentioning Gorman Thomas! Fifty-one homers was impressive no matter where you were back in the '70s.

Also, Montanez hit 30 homers as a rookie, but finished second in the NL rookie voting to Earl Williams.

Other blog stuff: In birthday news, Marilu Henner was born on this date and is a mind-blowing 58 years old. When she was on "Taxi," I was about 13. So, yeah, I liked her a lot.
Posted by night owl at 2:41 AM

When they were at the -stick the Giants played a lot of day games, I think because it was so cold there - and many action shots are in day games.

The Phils have a lot of their action shots at Wrigley - especially back when both teams played in the same division.

The last time I saw Marilu Henner was a couple of years ago. She still looked good.

Yes, Montanez not winning the NL ROY despite hitting 30 HR and 99 RBI stuck in the craw of many Phillies fans, who were desperate for any kind of good news back then!

Montanez was the throw-in the Phillies got from St. Louis in the Dick Allen deal when Curt Flood refused to report after the 1969 season.

By 1975, he had moved to 1B, and was traded to the Giants in mid-season straight-up for Garry Maddox. To plug the hole at 1B, the Phillies re-acquired Dick Allen. (full-circle!)