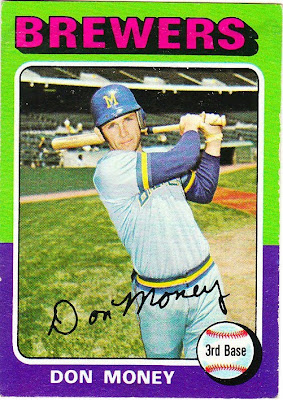 Card fact: No fact today, just an observation: both Don Money and Dave Cash played for the Phillies in the 1970s, but not at the same time. That's unfortunate. Imagine the possibilities with both Cash and Money playing in an infield at the dawn of free agency.

What I thought about this card then: Didn't see it. But Money was an adopted favorite of mine. I don't know why. It was probably because of his last name. But I do remember coveting his 1979 Topps all-star card.

What I think about this card now: Nothing other than the same thing I thought as a kid: what a cool name.

Other stuff: I grew up hearing constantly that Money was an exceptional fielder. He put together a couple of long error-less streaks and his nickname was "Brooks," after Brooks Robinson. But he never won a Gold Glove award.

Money was traded from the Phillies to make way for Mike Schmidt at third base. With the Brewers, Money blossomed as a hitter and was a regular with Milwaukee for a decade. He finished his pro career in Japan, but famously left abruptly in mid-season after he and his family struggled to adjust to life in the country. Money has worked as a manager in the Brewers organization for the last 12 years. 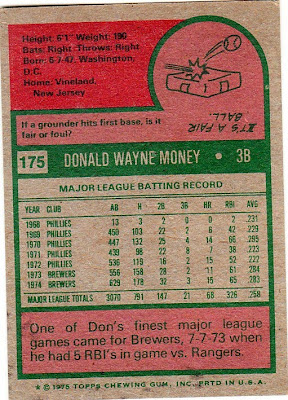 Back facts: I think this is the dullest back since I began this blog. I have nothing to say.

Other blog stuff: As you can see by the poll, "Try Again" was the winner as far as what we should name the green-yellow combo. I will try again, but if I get stuck, I'm going with "Lymon/Sprite." I think it works somewhat: 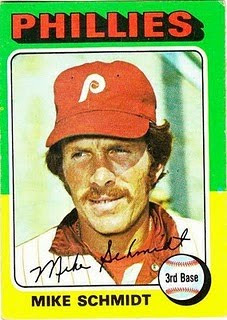 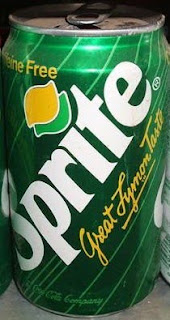 I think a lot of players have had "one of their best games" against my Rangers. I'm sad now.

Dave Cash and Don Money were also both originally property of the Pirates, and were later traded to the Phillies, I think in separate deals. I think Money might have gone to the Phillies in the Jim Bunning trade (to Pittsburgh), but am not sure.