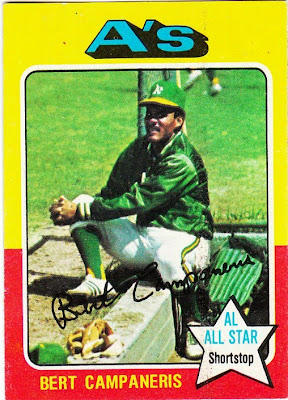 Card fact: The fifth all-star card that we've come across.

What I thought about this card then: I had the mini card and Bert Campaneris' pose is burned in my brain. This might be the only time a player is posed like that on a baseball card. It's certainly different.

What I think about this card now: As a kid, in my mind's eye, I always thought Campaneris was seated atop some building. But it looks like he's at an area at the end of the dugout or somewhere near the bullpen. It's kind of difficult for me to figure out.

Otherwise, you can't beat that shiny green jacket, the smile/grimace, the shadow across Dagoberto's face.

Other stuff: Bert Campaneris was a constant in my childhood -- a mainstay of the Oakland A's dynasty and one of the first free agents. He is one of of the best base stealers of all-time, leading the American League in the category six times. He was also a prolific bunter.

Campaneris was known for his volatile competitive nature. He threw his bat at the Tigers' Lerrin LaGrow after LaGrow hit Campaneris in the ankle during the AL Championship in 1972.

Among his other claims to fame are playing every position in a single game, which he did in 1965, and homering twice in his first game. He hit the first pitch he saw in the major leagues for a home run off of Jim Kaat.

Campaneris eventually signed with the Rangers after the 1976 season as the dismantling of the Swingin' A's began. His career started to decline after leaving the A's and he retired after the 1983 season with the Yankees, a season in which he actually hit .322 in 155 at-bats. 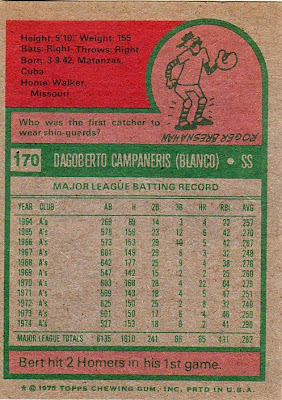 Back facts: Well, we're in the midst of a catcher equipment retrospective, aren't we? First the mask and now the shinguards.

Other blog stuff: Time to add to the all-star team. The left side of the infield for the American League is now complete:

Oh, and here's a look at the regular-sized card and the mini side-by-side: 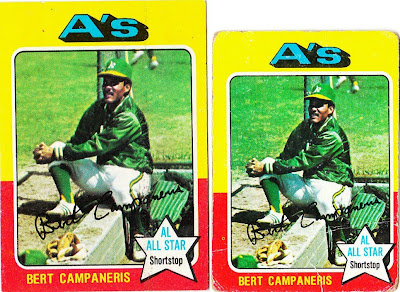 The look on his face is a little disturbing. Like he may have had a bad ballpark dog and he's feeling a little uncomfortable. That combo isn't too bad with the A's uniforms.