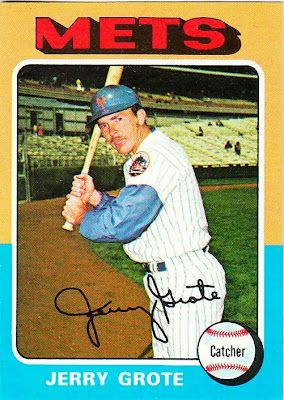 Card fact: The 15th player in the set to be wearing a batting helmet. In case you're interested, Thurman Munson (card #20) was the first.

What I thought about this card then: I never saw it. Since Grote was a Met, I was vaguely aware of him, but not really until the Dodgers acquired him. At the time I was obsessed with whether you pronounced his name "Groat" or "Groatie."

What I think about this card now: Forget about that. Do you pronounce it "Groat" or "Groatie"?

Other stuff: Grote sealed his place in history as the primary catcher for the 1969 Mets pitching staff of Tom Seaver, Jerry Koosman, etc. He was always known as an excellent defensive catcher and Johnny Bench famously said, "If Grote and I were on the same team, I would be playing third base."

Grote wound up with the Dodgers during their World Series teams of 1977 and 1978. He retired after the '78 season, but returned in 1981 to play for the Royals. The Dodgers picked Grote up again in September of 1981. He played in two games, but didn't compete in the postseason for L.A., which won the World Series that year. 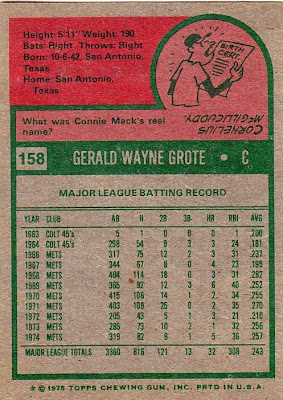 Back facts: It is always cool to see "Colt .45s" listed on the back of a card. Even when it's Joe Morgan's card.

Other blog stuff: Players in this set celebrating birthdays on April Fool's Day are: Phil Niekro (age 71), Rusty Staub (age 66) and Willie Montanez (age 62).
Posted by night owl at 2:45 AM

First baseball fight I ever remember seeing was a Mets–Expos game at Jarry Park, Jerry Grote vs. Ron Brand. Two catchers going at it after a home plate collision. Right now I’m not sure if it was a Brand sliding into Grote or Grote sliding into Brand. It was 50 years ago. Grote, as a young player, was known to be a hot head, but he seemed to mellow out a little later in his career.